Retired Sgt. Charles Horner Sworn In as Clerk of the Court 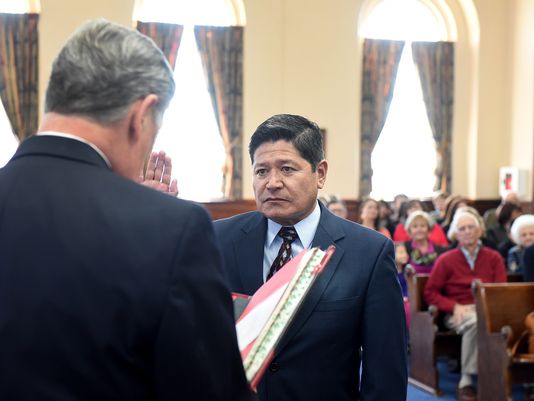 Congratulations to Retired Sgt. Charles Horner as he is sworn in as the Clerk of the Court in Somerset County Maryland.  We wish Charlie great success in his new position.

When Charles T. Horner was sworn in as the Somerset County Clerk of the Circuit Court on Monday, it marked the first time in more than a half-century that someone new has held that position.
Horner took the oath of office from Somerset County Circuit Court Judge Danny Long at the circuit courthouse, and then Horner swore in his chief deputy clerk, Faith B. James and a group of deputy clerks.
Horner said as clerk of the court, he wants to “continue on the tradition that Ted Phoebus has set over the last 51 years of his career.”
He said he approached Phoebus, the past clerk of the Circuit Court, about wanting to file for the position, and got his blessing.
Horner, a Republican, was elected to serve as the county’s clerk of the Circuit Court in the November general election. He received 4,043 votes, or 62.2 percent, and Kathy M. Grant, a Democrat, received 2,458 votes, or 37.8 percent, according to Maryland State Board of Elections unofficial online results.
Horner, 54, of Westover, retired from the Maryland State Police after 28 years; his official last day was Sunday, he said. He retired as a sergeant in the criminal intelligence section, where he was assigned to the FBI task force.
Although he isn’t a law enforcement official in his new role, law enforcement does have an obvious connection to the court system.
“It just seemed like a natural thing to do,” Horner said.
The job includes work relating to various areas, from criminal cases to mortgages, business and marriage licenses, and swearing-in employees, according to the Maryland Judiciary website.
Phoebus, who is 83, isn’t sure what he’ll do in his retirement. He said he’s enjoyed working with his colleagues while clerk of the Circuit Court, and he supported Horner.
Kirk Daugherty, who was there for the swearing-in on Monday, knows Horner through their time together at the Maryland State Police Salisbury barrack –– he retired in 1989 and is now Snow Hill’s chief of police –– and also through the Maryland Troopers Association.
Daugherty said it’s a tribute to the Maryland State Police to have one of its members elected to this type of office. He said Horner is the type of person who goes out of his way to help others.
“Just a great person,” Daugherty said.
Horner said he has “big shoes to fill.”
“I can’t say enough good about Mr. Phoebus,” he said.