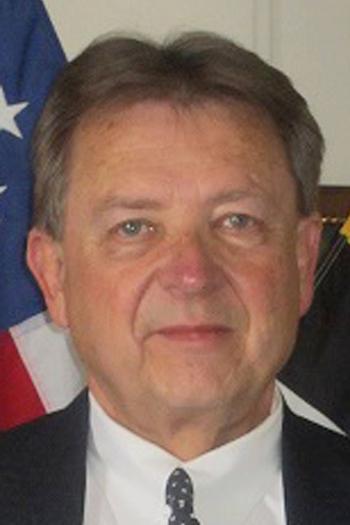 We regret to inform you of the death of Carroll County State’s Attorney Jerry Barnes.  Our thoughts and prayers are with his family and his friends at this difficult time.

The Honorable Jerry Francis Barnes, 66, of Hampstead, Maryland died Saturday, November 29, 2014 at Carroll Hospital Center. Born October 9, 1948, he was the son of the late Charles A. and Mary R. Byers Barnes. He was the devoted husband of Florence J. Barnes and loving step father of Jenna B. Wilmot and husband, Chris, of Cockeysville. He is also survived by his Aunt, Sandra Cook, cousins, Gregory Hutsell, Jeffrey Hutsell and Jennifer Freeman, all of Westminster.
Mr. Barnes graduated from Westminster High School in 1966, and after working a short period at Bendix Field Engineering, he was drafted into the US Army in 1968.
In 1969, he qualified as a Green Beret, after which he served in Vietnam as a member of the 5th Special Forces Group (Airborne). After receiving two Bronze Stars (one for “Heroism in Ground Combat”), the Combat Infantryman Badge (CIB), and being Honorably discharged in 1971, he attended and graduated from the University of Baltimore Law School. He was thereafter a career prosecutor serving both with Frederick County State’s Attorney’s Office and Carroll County State’s Attorney’s Office.
He was distinguished as Chief Narcotic’s Prosecutor for Frederick County from 1991 through 1994. From 1995 until present, Mr. Barnes served as the elected State’s Attorney for Carroll County, Maryland. Since becoming a prosecutor in 1978, Mr. Barnes personally prosecuted thousands of criminal cases. He also oversaw a busy office comprised of 54 staff members – all responsible for successfully prosecuting criminal, juvenile and traffic cases in Carroll County’s three courts.
Mr. Barnes devoted his entire working career to helping his community. Over the decades, he helped others both professionally and personally, many times when they did not even know it. Among some of his initiatives, he spearheaded and implemented the Heroin Action Coalition and established a position specifically designated to prosecute Domestic Violence cases.
Mr. Barnes was a specialist in drug enforcement serving as Chief Narcotics Prosecutor and actively prosecuting numerous drug distribution and other serious drug felony and misdemeanor charges. He attended and graduated from the Drug Enforcement Administration Agent’s Course and the Maryland State Police Undercover Drug Course.  He was sworn in as Assistant U.S. Attorney for the District of Maryland to prosecute drug cases.
Throughout his legal career, he received a multitude of awards for his hard work, leadership and dedication to the citizens of Carroll County and the State of Maryland. Highlights of the numerous awards and accolades he received include but are not limited to the following: U.S. Attorney’s Office for the District of Maryland, Certificate of Recognition- In recognition of “Exemplary Performance, Initiative and Commitment in Fostering and Preserving Public Safety Within the District of Maryland” (1999); Named Chief Narcotics Prosecutor; U.S. Department of Justice, Drug Enforcement Administration Certificate of Appreciation, 1994; Maryland Troopers Association Lodge #20 Endorsement; Carroll County, Maryland Marine Cadet Corps Commander Award; Maryland State Fire Marshall, Certificate of Appreciation for “Outstanding Leadership and Commitment to Protecting the Citizens of Carroll County”; U.S. Department of Justice, U.S. Attorney’s Office, Certification of Recognition for the Reality Program; Maryland State Police – Certificate of Appreciation; Attorney General’s Family Violence Council, Domestic Violence Unit, Certificate of Merit; The Westminster Lions Club- Outstanding Leadership Award; Carroll County Health Department Recognition Award; Governor’s Certificate of Merit- Crime Prevention; United States’ Senators Award of Excellence- Service to Seniors; The United States Committee for Celebration of the United States Nations International Year of Older Persons; Maryland House of Delegates, House Resolution Award- Cell Phones for Seniors; Drug Enforcement Agency (DEA), for Outstanding Service; US Attorney’s Office, for Outstanding Service; United Nations, for Outstanding Service (Senior “911” Cell Phones); US Senate, for Outstanding Service (Drug Awareness Programs); Governor’s Office, for Outstanding Service (Victim Witness Services); Maryland State Police, Superintendent’s Recognition for Specific Prosecution’s/Efforts; Maryland State Police, Superintendent’s Recognition for Superior Drug Enforcement Accomplishments; Victim/Witness Associations, for Superior Victim/Witness Efforts; Frederick County Narcotics Task Force, for Superior Service in Drug Enforcement; Maryland State Fire Marshal, for Superior Successful Arson Prosecutions; Maryland State Trooper’s Association, for Working on Cpl. Ted Wolf’s Homicide Case; Reality Program, for Maryland’s Most Productive Reality Program; and National History Honor Society (Phi Alpha Theta)
The family will receive friends on Thursday from 2-8 pm at Pritts Funeral Home and Chapel, 412 Washington Rd., Westminster.
A funeral service will be held on Friday at 1pm at St. John Catholic Church, 43 Monroe St., Westminster , with Chaplain Pat Geyer, officiating.
Internment will be private. In lieu of flowers donations may be made in his name to Misfits Animal Sanctuary, P.O. Box 75, Finksburg, MD 21048-0075.
Online condolences may be offered at www.prittsfuneralhome.com.

The following article appeared in the Times.

Around 10:30 a.m. Saturday morning, Carroll County sheriff’s deputies responded to a report of an attempted suicide at a home in Westminster. It was there that they discovered Barnes and that EMS personnel began to provide aid. He was taken to Carroll Hospital Center, where he was pronounced dead, according to the release.
Barnes, 66, a lifelong resident of Carroll County, had served as the county’s state’s attorney for the past 20 years.
Amy Blank Ocampo worked with Barnes in the state’s attorney’s office for nearly all of that time. She said she was proud to have known and worked for him.
“The one thing about him that everybody knew was how passionate he was about being a prosecutor,” Ocampo said. “I know that job was honestly very important to him. The other thing about him is that he was always full of encouragement. When I was just out of law school and knew I wanted to be a prosecutor, he took an interest in my development. I have notes of encouragement from him that I will cherish from cases where he thought I did a good job.”
Carmen Amedori, who served in the House of Delegates for District 5 and was Barnes’ wife from 1988 to 2000, said that Barnes was a fighter who always wanted to protect everyone and do the right thing.
“Jerry was a very humble and gracious man. He was very generous, and he did everything he could do to help other people, and he will be very sorely missed,” Amedori said. “Jerry was not only a good friend of mine, but he was also a great political mentor. He taught me what it meant to be a gracious politician.”
Barnes graduated from Westminster High School in 1966 and joined the military in 1968, becoming a Green Beret a year later, according to his candidate profile in the Carroll County Times. He served in the Vietnam Special Forces Group from 1969 to 1970 in three camps near the Laotian border and was twice awarded the Bronze Star before being honorably discharged in 1971.
Barnes began as a Carroll County assistant state’s attorney in 1977, the year he passed the bar exam, and left the position in 1989. After working in Frederick County for several years, Barnes was elected Carroll County state’s attorney in 1994. In 2014, he lost the election for the state’s attorney position to Brian DeLeonardo, who is to take over the role in January.
Barnes leaves behind a legacy of defense for victims of domestic violence throughout his 20-year career. According to an article from the Times, Barnes was awarded a governor’s citation from Gov. Parris Glendening for forming an office dedicated solely to prosecuting domestic violence cases in 1997. The year the office was established, the percentage of guilty verdicts in Carroll County domestic violence cases increased from 55 percent in 1996 to 68 percent in 1997.
Gary Cofflin was the first domestic violence investigator Barnes recruited for his specialty unit. Cofflin said Barnes was dedicated to being the best state’s attorney he could be.
“He was very gung-ho about fighting domestic violence throughout the county. I’m going to miss the guy,” Cofflin said. “He had a lot of accomplishments throughout the county. He’s going to be missed in law enforcement as well as by the rest of the county.”
In 1997, Barnes became the first Maryland state’s attorney to receive a superintendent commendation, generally reserved for state troopers in the line of duty. Superintendent Col. David B. Mitchell cited Barnes’ accessibility to the public as reasoning for the award.
In addition to his work combating domestic violence, Barnes supported the county’s anti-heroin efforts in 1998, paying out of pocket for 250 signs and 500 bumper stickers in the “Heroin Kills” initiative, according to a Times story.
State’s attorney-elect Brian DeLeonardo posted a statement on Facebook: “I am so incredibly saddened to hear the news of State’s Attorney Jerry Barnes’ passing today. He gave many years of dedicated service to our country and Carroll County. I am still in shock over the tragic news. My thoughts and prayers certainly go out to his family. As to the members of the States Attorney’s Office, know that my thoughts are with you as well during this difficult time.”
Barnes leaves behind a wife, Florence, and a stepdaughter, according to candidate profiles submitted to The Baltimore Sun and the Times.