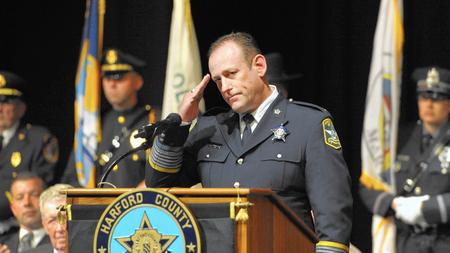 Congratulations to Retired Captain Jeffrey R. Gahler as he is sworn in as Harford County Sheriff.  We wish Jeff continued success as he assumes his new role as Sheriff and works to provide quality law enforcement and public safety services to the citizens of Harford County.

With three former Harford County sheriffs sitting to his right, and his wife and two daughters sitting to his left, Sheriff Jeff Gahler pledged to an audience of nearly 600 people during his inauguration Monday to return more deputies to patrolling the community.
He also vowed to work with the county government and the State’s Attorney’s office to combat heroin and ensure the Harford County Sheriff’s Office remains “a place that will inspire and instill confidence in you every day.”
Members of the audience, many of them deputies under his command, gave Gahler, who defeated two-term incumbent Sheriff Jesse Bane in the November general election, a standing ovation as he walked onstage in the auditorium of The John Carroll School in Bel Air.
Gahler, a Forest Hill resident, is a retired Maryland State Police captain with 28 years of experience with the agency, including serving as commander of the State Police Barrack in Bel Air. He ran an unsuccessful campaign against Bane in 2010.
In addition to former Sheriffs William Kunkel, Joseph Meadows and Tom Golding, and Gahler’s family, the stage was filled with local law enforcement representatives, such as the chiefs of the county’s three municipal police departments, County Executive Barry Glassman, who was sworn in Monday afternoon during a ceremony at Harford Community College, Glassman’s predecessor David Craig, members of the Harford County Council, state legislators and Harford State’s Attorney Joseph Cassilly.
Members of the Sheriff’s Office, many who wore their dark blue dress uniforms, filled the rows of seats in the auditorium, along with Gahler’s campaign supporters, law enforcement officers from agencies such as local municipal police departments, the Maryland State Police, Maryland Transportation Authority Police and even military police officers.
John Carroll was used as the venue because of its central location in Bel Air, and its previous use by the Sheriff’s Office for events such as academy graduation ceremonies, according to Sheriff’s Office officials.
Gahler, and the deputies in the audience, were sworn in together by James Reilly, Harford County Clerk of the Circuit Court.
“Ladies and gentlemen, Sheriff Gahler!” Cpl. Shawn Craig, of the Sheriff’s Office traffic unit, the event’s emcee, said after the oaths of office.
Gahler was greeted by loud cheers and another standing ovation.
“What a humbling experience,” the new sheriff told the audience.
He thanked those who put the inauguration together, his campaign supporters and his family.
Gahler was briefly overcome with emotion as he talked about his wife and daughters and thanked them “for their unwavering support, for their encouragement and their belief in me.”
He said they have been through “good times and some times that were not so good” on his seven-year journey to become sheriff.
“Through it all, and without fail, they were always there for me,” he said.
Members of the Sheriff’s Office Law Enforcement Explorers Program, a program for local youths to learn about law enforcement, presented bouquets of flowers to Gahler’s wife and daughters.
Gahler told his campaign supporters that his victory “wasn’t my victory, it was our victory.”
“I thank you so much for bringing us to the change that Harford County was looking for,” he said.
Gahler acknowledged the three former sheriffs, and he thanked Bane “for his many years of service.”
“It is my hope that I can make each of these men proud,” he said.
Gahler said his goals include building on his predecessors’ efforts to reduce crime in the county with more community policing and “data-driven” strategies, as well as focusing efforts on “the most violent offenders” and targeting areas of the county that have the greatest needs.
He said his assessment of Sheriff’s Office personnel continues, and his goal is to put as many deputies in the community as possible.
He also pledged to work with the new county administration and Harford’s long-serving state’s attorney to take on heroin.
Glassman called heroin a “scourge” during his inaugural address.
“I pledge to combat this threat head on with our partners,” Gahler said.
Gahler introduced the members of his command staff, including Chief Deputy Steven Bodway and Harford County Detention Center Warden Michael Capasso.
Craig, the emcee, cited a quote from the famed British Prime Minister Winston Churchill, who said that “history will be kind to me, for I intend to write it,” in his closing remarks.
Craig said Gahler “will be writing history with this prestigious agency.”
“Congratulations on your new sheriff,” Walter Johnson, of Fallston, told the uniformed deputies sitting behind him.
Johnson is a retired first sergeant with the Maryland State Police, and he worked in the Bel Air Barrack and JFK Memorial Highway Barrack in Perryville.
He said he got to know Gahler when he began participating in a State Police retiree breakfast at the Bob Evans restaurant in Bel Air.
Kunkel, who served as sheriff from 1963 to 1981 and was a deputy from 1953 to 1963, said after the ceremony that he helped Gahler with his campaign and endorsed him.
“I like Jeff,” Kunkel said. “I think he will, and I’m hoping he will, do a good job.”
Kunkel said that he does not need to give Gahler any advice on being sheriff.
“He has the prior [law enforcement] experience,” Kunkel said. “He doesn’t need any advice from me, and he has a lot of good people working for him.”
Golding, who served from 2003 to 2006 and has since retired to central Florida, flew up for the ceremony.
Golding said he had known Gahler through the State Police, and that “he’s a good man and he’ll do an outstanding job as sheriff.”
“I’m proud to bring him into the fraternity of sheriffs,” Golding said. “That’s why I made sure I flew up here for this ceremony.”