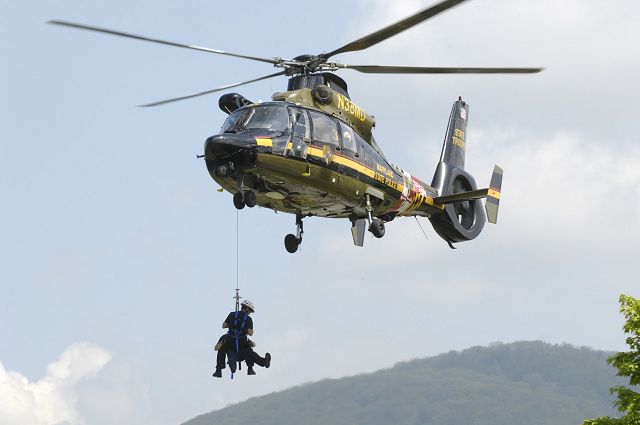 (CUMBERLAND, MD) – David Cooper descended from a line of sailing ship captains, but while serving on the Coast Guard cutter ACTIVE, he soon discovered he did not inherit a stomach for rough seas. During one mission to save a sinking fishing boat, he watched as a Coast Guard helicopter flew by on its way to deliver pumps, then pass by again on its way home, changing his ship’s mission from rescue to escort. It dawned on Cooper that getting into a helicopter would allow him to do rescue work while spending most of his career ashore. This epiphany resulted in a lifelong search and rescue career, through which hundreds of people have been rescued and scores of lives have been saved by helicopter crews led by this military and police pilot who is stepping out of uniform after more than 40 years of service.

Pilot David Cooper, of Hedgesville, West Virginia, is retiring after outstanding careers in both the Maryland State Police and the United States Coast Guard. He will leave service as a State Police pilot for Trooper 5 in Cumberland on December 1, 2012.

Cooper was born in Cumberland 67 years ago. His family lived in Keyser, W.Va. at the time, but, because his father was in the United States Marine Corps, they didn’t stay in one place too long. Cooper attended Maury High School in Norfolk, Va. and then graduated from Randolph-Macon College in Ashland, Va., where he played lacrosse.

After college, Cooper joined the U.S. Coast Guard and soon found himself on a ship, feeling queasy in rough seas. He applied for and was accepted to naval flight training. He became a Coast Guard pilot in 1971 and began his career of rescuing people and saving lives.

His Coast Guard career as a rescue helicopter pilot included assignments in Cape Cod, Brooklyn, NY, and Traverse City, MI. He also completed an exchange tour with the US Air Force in Thailand. Cooper flew a variety of helicopters, including the HH-53 Super Jolly Green Giant, the HH-52A and the HH-3F. By the time he left the Coast Guard, he had more than 7,500 hours behind the controls of Sikorsky helicopters.

Cooper retired from the US Coast Guard in 1988, with the rank of Lieutenant Commander. He moved to Spokane, WA, where he flew hospital transports and worked as a helicopter pilot fighting fires.

Feeling the urge to try something different, Cooper went back to college and earned a teaching degree. He took a job teaching middle and high school in Washington State. It wasn’t long however, before his experiences in the classroom taught him that flying rescue helicopters was ‘less dangerous.’

A friend told Cooper the Maryland State Police Aviation Command was hiring helicopter pilots. It would be a perfect fit for this talented pilot seeking to continue his career of aerial public service.

Cooper moved to Hedgesville, W.Va., with his wife and daughter and joined the Maryland State Police in February, 1997. He was soon checked out in the American Eurocopter Dauphin helicopter used by the State Police and was assigned to the Cumberland Section, which services the Western Maryland region.

Pilot Cooper was excited the State Police aircraft had a hoist and it wasn’t long before he and his trooper flight paramedic were putting it to good use. Throughout his State Police career, Cooper maneuvered the helicopter into tight spots, often at night, while his flight paramedic lowered the rescue net or basket on the hoist to someone stranded or injured down below. He helped rescue people stranded in the middle of flood swollen rivers, waiting on tops of cars or in trees for help to arrive. With no one able to reach them from the ground, Cooper and his helicopter were often the only hope for these victims.

Cooper enjoyed the challenge of flying medevac and rescue missions in the unpredictable weather and mountainous terrain of Western Maryland. His years of experience kept him calm and in control while he piloted the six million dollar aircraft with another victim’s life hanging in the balance.

After years of rescue flying, fighting fires and hoisting victims, there were probably few pilots better prepared to take on the challenge David Cooper and his crew faced on the night of March 4, 2006. He was on duty at the Cumberland Section when a call came in from West Virginia authorities who needed help fast.

A Maryland State Police helicopter was requested for a rescue at the scene of a construction site fire in Moundsville, W.Va. An explosion had started a fire within a 1,000 feet tall smokestack under construction. Three workers were trapped on a platform at the top of the stack and were surrounded by a fire that was quickly making its way to their location.

As Pilot Cooper readied for flight, his crew of flight paramedics, Trooper First Class Alex Kelly and Trooper First Class Larry Levasseur, along with two members of the High Rise Emergency Aerial Team from the Cumberland Fire Department climbed aboard. Fighting an extreme wind, Cooper lifted off and headed west into the darkness. When they arrived, it seemed to Cooper that all his flying experiences of Coast Guard rescues, hovering over fires dropping water, and hoisting victims from precarious spots, had prepared him for this moment.

The crew decided it was too dangerous to lower rescue teams to the trapped men. Pilot Cooper settled the aircraft in over what to him was just one more fire. The flight paramedics lowered a rescue basket into an area of about ten feet by ten feet, where the trapped men were huddled inside the walls of fire. Still fighting stiff winds, Cooper kept the helicopter in place while the flight paramedics somehow placed the rescue basket into a spot that looked to them to be about the size of a postage stamp.

Each of the three trapped men was individually hoisted into the helicopter. When all three were safely inside, Cooper moved the helicopter off its aerial perch and landed nearby where medical help was waiting. Authorities estimated that within 15 minutes of the time the last man was hoisted to safety, the fire consumed the platform the men had been on. All three men survived the ordeal.

It would be hard for the average person to get to sleep after a shift like that, but it was just another day at the office for Cooper. “To me, flying didn’t seem like working,” Cooper said. “Sitting over a burning tower didn’t stress me out. You train for it and you do it.”

When asked how many people he has helped save in his careers with the Coast Guard and the State Police, Cooper demures. He points out that most of the people he has helped rescue were saved from additional pain and suffering, but not necessarily from death. But even being conservative, there is no doubt Cooper has been the pilot on Coast Guard and State Police missions that have rescued hundreds of people and saved scores of lives.

A few of his missions, like the Moundsville rescue, stand out. One involved a medevac from a ski resort in West Virginia. A girl in her early teens collided with a tree while skiing. Cooper and his flight paramedic, Sgt. H.B. Martz, picked up the critically injured girl and flew her to what was then the Cumberland Memorial Hospital.

Sometime later, Cooper was at the helicopter hangar in Cumberland when the girl’s parents brought her back to personally thank him. She was almost fully recovered. Her thanks and the appreciation expressed by her parents reminded Cooper that his mission was not about making money. It was about saving lives and making a difference each day for others.

“The reward I received from this career wasn’t the pay,” Cooper said. “It was the intrinsic reward of helping someone.”

In addition to the heartwarming aspect of public service as a State Police pilot, Cooper will also admit he liked the challenge. “I was also rewarded by overcoming the challenge of flying out here in the mountains, especially at night,” Cooper said. “I’ve enjoyed it.”

While Cooper may be hanging up his State Police helicopter helmet and flight suit, he does not intend to stop flying. “I will continue to fly,” he said. “But I will be spending a lot more time with my wife and daughter.”

If you meet David Cooper, you will find a quiet, unassuming man who will give little indication of the life of excitement and meaning he has led. If you are fortunate and try hard enough, you may get him to talk a little about his career.

But ultimately, you can be sure there are many people alive today who never knew the name of the talented and committed pilot who was at the controls of the helicopter the night they were saved. That doesn’t matter to Cooper. He did not do this job for fame or fortune. He flew rescue missions to save people. And, for more than 40 years, he did that very, very well.