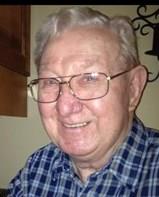 We regret to inform you of the death of Retired Lt. James P. Monaghan on March 14, 2017. Our thoughts and prayers are with the Monaghan family at this difficult time.  The following obituary information has been reprinted from the Schimunek Funeral Home website.
In Memory of James Patrick Monaghan
March 11, 1924 – March 14, 2017
Obituary
James Patrick Monaghan, “Jim” was born in Wicklow, Ireland on March 11, 1924. He was the third child of ten, born to his parents, Michael and Mary Monaghan. Jim passed peacefully at the home of his daughter, Patricia McDonnell and son-in-law, Daniel McDonnell on March 14, 2017.
He is survived by his daughter Patricia Monaghan McDonnell, grandchildren Erin Patricia Gaeng, Colleen Monaghan Rochelle and Michael Reilly Monaghan, great-grandchildren William Patrick Rochelle, James Monaghan Gaeng, Madison
Rayne Monaghan, Emily Rayne Gaeng and Parker Reilly Monaghan, and siblings Michael Monaghan, William Monaghan, Dennis Monaghan and Norah Monaghan.
James entered the US Army on March 5, 1942. He served during WWII in the 101st Airborne and landed behind enemy lines on the beaches of Normandy, France on D-day, June 6, 1944. He was wounded on June 8 in Normandy and again on January 3, 1945 in Belgium.
Jim was a highly decorated Private First Class, receiving the European African Middle Eastern Service Ribbon, Good Conduct Medal, Purple Heart Medal and the Distinguished Unit Badge. He was honorably discharged from the Army on October 9, 1945.
In 1946 James joined the Maryland State Troopers on the Eastern Shore of Maryland. On March 29, 1948 he married the love of his life, Diane Rosina Rayne of Willards, MD They went on to have their daughter, Patricia Diane Monaghan on January 21, 1951 and son, James Patrick “Ricky” on April 20, 1954.
In 1965 Jim was transferred to the Kennedy Highway and he and his family moved to Fairmont Drive in Bel Air where he had lived for the past 52 years. He also joined St. Margaret’s Catholic Church at this time and was a faithful member until his passing.
In 1977 James retired from the Maryland State Troopers as a Second Lieutenant. On January 1, 1978 he became the Chief of Police of Bel Air where he served until March 1, 1985. He was also a lifetime member, receiving his 50 years of membership certificate and served for a time as commander at the American Legion, post 39 in Bel Air.
Jim and his wife, Diane, (who passed in March of 2008) loved spending time with their family and friends. Time with their grandchildren Erin, Colleen and Michael was especially cherished. They had a large community of friends with whom they enjoyed playing golf and celebrating life. James Patrick Monaghan’s place in the Harford County community, and State of Maryland will be sorely missed.
Visitation will be held on Friday, March 17, 2017 from 4:00 pm – 7:00 pm at Schimunek Funeral Home of Bel Air, Inc., 610 W MacPhail Rd., Bel Air, MD 21014.  (410) 638-5360
Funeral Service will be held on Saturday, March 18, 2017 from 11:00 am – 12:00 pm at St. Margaret Church, 141 N. Hickory Ave., Bel Air, MD 21014
Committal Service will be held on Sunday, March 19, 2017 from 1:00 pm – 2:00 pm at Dennis Cemetery, Powellville Road, Willards, MD 21874