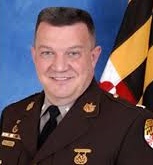 February 17, 2015
ANNAPOLIS, MD – Governor Larry Hogan today announced William M. Pallozzi as his appointee for superintendent of the Maryland State Police. With his appointment to superintendent and most current rank of colonel, Pallozzi has now served in every rank of the Maryland State Police.
“I am honored to have a law enforcement professional of Bill Pallozzi’s caliber join our administration,” said Governor Hogan. “For over two-and-a-half decades, Bill has risen through the ranks of the Maryland State Police, and I am confident that he will lead the men and women of this respected agency with the utmost integrity and will work tirelessly to protect and serve all the citizens of Maryland.”
Pallozzi began his career as a patrol trooper with the Maryland State Police in 1989. Since that time, he has held various supervisory and leadership positions, including commander of the Executive Protection Division; chief of staff in the Office of the Superintendent; chief of the Criminal Investigation Bureau; and chief of the Support Services Bureau. In his last role, he oversaw multiple, complex projects and programs impacting every aspect of the Maryland State Police.
Pallozzi graduated from North Georgia College, The Military College of the University of Georgia, in 1988 with a Bachelor of Science degree in criminal justice. Upon his graduation, he was commissioned as a 2nd lieutenant in the U.S. Army. Pallozzi served in the Military Police Corps, the Special Forces Group (Airborne), and the Special Operation Command Readiness Group. He was honorably discharged as a captain in the U.S. Army Reserves in 2003.
Additionally, Pallozzi holds a Master of Science in Management and Leadership and is a graduate of the Police Executive Training Program, both from The Johns Hopkins University. He has successfully completed more than 2,000 hours of professional education programs and training courses on a variety of topics, including executive management, legal issues, homeland security, and protective, investigative, and law enforcement operations.