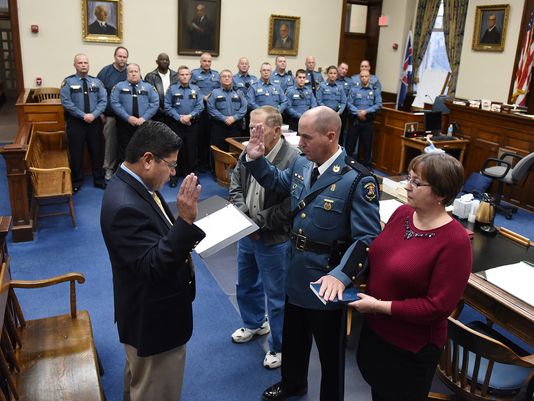 Retired TFC Ronald Howard was sworn in as the new Somerset County Sheriff on December 2, 2014.  We wish Ronnie much success as he assumes his new duties and responsiblities.

In front of a courtroom gallery filled with family members and fellow law enforcement officers on Tuesday, Ronnie Howard was sworn in as Somerset County’s new sheriff.
“You can tell he’s popular,” said Somerset County Sheriff’s Office Lt. George Nelson. “The courtroom is full.”
Howard becomes the first new Somerset County sheriff in 28 years, as former sheriff Bobby Jones decided not to run again.
Howard, a Democrat, won the election against Republican Rick Taylor with 3,740 votes to Taylor’s 2,852, according to unofficial election results on the Maryland State Board of Elections website. Howard took 56.6 percent of the vote.
Nelson not only worked with Howard at the Sheriff’s Office, but they also worked together on a task force –– the former Somerset Bureau of Investigation –– during Howard’s time with the Maryland State Police.
Howard said he was with the state police for 25-and-a-half years before he retired. He became a Somerset County Sheriff’s Office deputy in 2008 and was appointed chief deputy in 2010.
Nelson said that Howard, who is from Somerset County, knows the county and its people.
“He’s a good guy. Homegrown,” Nelson said.
Howard, 51, of Westover said he wants to have school resource officers in Somerset County public schools starting with the 2015-2016 school year; the school system doesn’t currently have any. He’d like to work with school Superintendent John Gaddis and see if there are any funded positions not filled.
He said he’d also like to have monthly community meetings for the public at the county’s nine fire stations.
While Howard said his chief deputy –– who has not yet been named –– will handle policies and procedures, he plans to be active in working on the budget and expects to meet monthly with the county commissioners.
Maryland State Police Capt. Dalaine Brady, now commander of the licensing division, said Howard was her field trainer, along with new Somerset County Clerk of the Circuit Court Charles Horner, who swore Howard in. Horner is also retired from the Maryland State Police.
Brady is from Baltimore City, and she was assigned to work in Somerset County in 1995. Not only did she learn about law enforcement from Howard, but about life in a rural area, she said.
They worked together during her five years in Somerset County.
“He taught me the art of criminal investigation and how to be an active listener,” Brady said.
Howard said it feels strange to officially be sheriff, since Jones has held the role for so long. He again expressed how he’s grateful for what Jones has done for him.
“It’s something I’ve wanted to do for a long time,” he said.