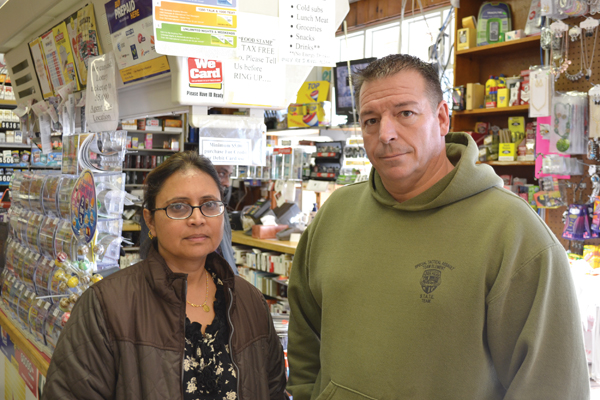 Reprinted from the Cecil Whig

The situation was bleak inside Chrome Dairy & Deli on West Main Street in Rising Sun about 10 o’clock on Friday morning – as a masked gunman called all the shots.

With the bandit pointing a loaded handgun at her, store co-owner Lata Patel, 46, already had filled the gunman’s black sack with stacks of bills from the cash register near the front entrance.

Meanwhile, a 46-year-old man lay on his belly in an aisle toward the back of the ma & pa shop, which is reminiscent of an old-fashioned general store.

That customer had walked into the otherwise empty store from a rear door, unaware of the unfolding holdup, and his entrance momentarily diverted the gunman’s attention from his robbery.

The gunman quickly pointed his weapon at the unwitting interloper and ordered him to assume a prone position.

With the gunman’s two victims stabilized and his bag full of stolen money, it appeared that this armed robbery was over.

But instead of sprinting out the door, the bandit continued to brandish his gun and ordered Patel to take him to the safe in a back office.

That’s when another patron walked into the store, this time entering through the front door, and interrupted the bandit.

Appleby is a retired Maryland State Police trooper, having served 28 years with the agency before retiring in July.

According to Patel, who was well aware of Appleby’s law enforcement background, he was a sight for sore eyes at that moment.

Until that instant, having stared down the barrel of her assailant’s handgun, Patel wasn’t sure if she’d survive.

The gunman immediately approached Appleby, who had planned to buy iced tea and coffee creamer while his girlfriend waited in their Jeep parked in front of the store.

“He points the gun at me and says, ‘Come over here,’” said Appleby, who said the bandit was “covered from head to foot” in ski gear, including snow bibs, a ski hat, mask, gloves and dark sunglasses.

Appleby offered the gunman cash from his pocket, hoping he would accept it and leave. But the robber declined and informed Appleby that everyone was heading to the rear of the store.

The gunman then corralled Appleby, Patel and the other customer – who had his arms raised over his head – and led them to the back of the shop.

“The minute he said we’re going to the back, I knew right then and there I had to do something, take away his weapon, something,” Appleby said, adding that “usually nothing ever good happens in the back” of a store during a robbery.

After Patel unlocked the office door and they entered, Appleby made a point of keeping himself and the other two victims on opposite sides of the gunman to make it harder for him to focus on them.

Falling back on training he had received as a state trooper, Appleby used a safe technique to strip the gun out the robber’s hand. It involved grabbing the handgun in such a way that it could not be fired.

Before Appleby – now holding the weapon – could bark a command at the robber, though, the suspect dashed through the store and out the front door.

Although Appleby now had the loaded handgun, he had no grounds to shoot the robber.

“I had the weapon. His back was to me. He was fleeing. If I had shot him, I would have had some explaining to do why,” Appleby said, adding that disarming the suspect was his main goal.

Appleby chased the bandit, who headed west on Main Street and then sped away in a white Ford Bronco.

After Appleby hustled out the store’s front door, he told his perplexed girlfriend to call 911 to report an armed robbery.

“She sees me with this gun in my hand that I didn’t have when I went in there. The look on her face was priceless,” Appleby said.

The suspect remained on the loose as of Tuesday night, according to the Cecil County Sheriff’s Office, which is handling the investigation.

While Patel and the other customer believe that Appleby acted as hero, Appleby downplays his actions.

“Being a hero had nothing to do with it. It was simply self-preservation. Fortunately, I had the ability to disarm him, so I used it,” Appleby said. “It wasn’t about being a hero, it was just about getting out of it OK.”