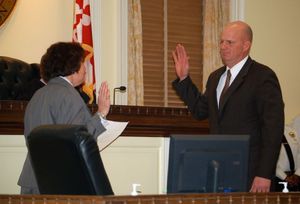 Congratulations to Retired Lt. Joseph Gamble as he is sworn in as Sheriff of Talbot County Maryland.  We wish Joe great success as he assumes leadership of the Talbot County Sheriff’s Department.

Article from the Star Democrat

EASTON — Joe Gamble was sworn in as Talbot County’s sheriff on Tuesday, Dec. 2. The ceremony packed Talbot County’s main circuit court room — full of family, friends, police officers and local dignitaries showing their support.
“The people of this wonderful county have employed, educated, coached, pastored and protected my family for many years,” Gamble said. “I am forever in your debt, and (for) all of the outpouring of love and support during this campaign.”
Gamble ran unopposed in the November general election after beating incumbent Dallas Pope, getting about 63 percent of the vote in the Republican primary.
Gamble was a lieutenant who supervised the Maryland State Police’s homicide unit, and drug task forces on the Eastern Shore and in southern Maryland, and its detective units.
Going into the election, Gamble said he wanted to cooperate with surrounding counties’ law enforcement agencies and fire and EMS departments. He reiterated that notion on Tuesday after taking his oath of office.
Similarly, County Manager Clay Stamp, in his other role as director of emergency services for the county, said he is excited to work with Gamble.
“Today’s a good day. Today’s a day I get to have a new partner, a new partner with our emergency services to start working together with the sheriff’s office,” Stamp said. “We’ll do good things together.”
Gamble, thanked many who he said made his victory possible — local police chiefs, former co-workers, family, many friends, fire departments, the county council, state’s attorney office and his pastor, among others. He addressed his new deputies present in the room, calling them the newest extended family to him and his wife, Mary.
Gamble said he’s proud to be their sheriff, and said teamwork will be the key to success.
“We will not be able to turn this office into the office that this wonderful community deserves and has demanded without you,” Gamble said to his deputies.
“When one of us stumbles, all of us will be there to pick them up. When one of us mourns, all of us will mourn. We can’t and will not meet the demands of this community without supporting each other, being there for one another, forgiving one another and caring for one another,” he said. “If one only strives for caring solely about themselves, in the end they will get what they wanted — just themselves.”
Gamble said that in the coming weeks he plans to ride with each deputy to get to know them better, and also for them to get to know him better, too.