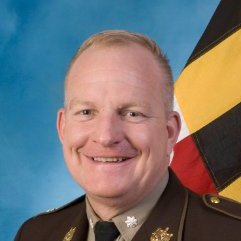 Governor Larry Hogan reshuffled his homeland security team Friday to replace two top officials he appointed when he took office in January.
The Governor named Walter F. “Pete” Landon, a retired Maryland State Police lieutenant colonel, as director of the Governor’s Office of Homeland Security. He will succeed Timothy E. Hutchins, a former state police superintendent and delegate from Charles County.
Russell Strickland, a former emergency services director in Harford County, was named to replace Clay Stamp as executive director of the Maryland Emergency Services Agency.
Matthew A. Clark, Hogan’s communications director, said neither Hutchins nor Stamp was asked to leave and that both men are resigning for personal reasons.
Stamp, who played a key coordinating role during the Baltimore riots this spring, will stay on as a senior adviser on emergency management and will chair and advisory council on emergency management.