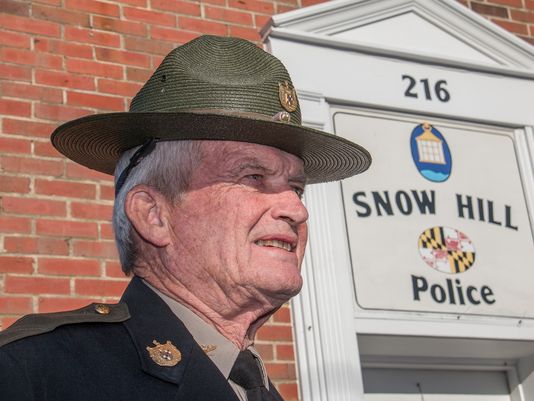 Retired F/Sgt. and MTA President Kirk Daugherty has announced his retirement as Chief of the Snow Hill Police Department.  We thank Kirk for his decades of dedicated service to the citizens of Maryland and wish him a long and happy retirement.

“It has really been one of the highlights of my law enforcement career,” he said of working for Snow Hill. “I have been treated royally. When I first when down there, I’d speak to everybody. They’d look at me like, ‘have you lost your mind?’ I guess they were not used to the police interaction with the public. People I didn’t know or never met, I’d see them walking down the street, I’d wave at them.”
As a boy, Daugherty lived in Crisfield before moving with his family to Bridgeville, where he was raised. He attended the Johns Hopkins University School of X-ray Technology. In 1962, that landed him a job back in Crisfield, at McCready Hospital.
He was the hospital’s only X-ray technician. One day, a trooper’s wife had been in an accident, and Daugherty took her X-rays. He and the trooper became fast friends; Daugherty said sometimes, the trooper would let him ride along in his patrol car.
When Maryland was readying to open its leg of Interstate 95, the state police needed more manpower, and the trooper suggested Daugherty apply. He did, and in 1963 Daugherty graduated from the academy among a class of 75 cadets, the largest-ever class at the time, he said.
Early in his state police career, Daugherty said his medical background came in handy. There were no EMTs on the Shore in the 1960s, he said. Instead, volunteer firefighters came to accident scenes, armed only with basic first aid training from the Red Cross. Full-time professional paramedics would not be commonplace on the Shore until the 1970s.
Daugherty retired from the state police in 1989. He mostly had worked road patrol, but also had been a medic with the newly-formed State Police Aviation Unit, flying in medevac helicopters to assist accident victims.
In that role, Daugherty said at times he crossed paths with Dr. R. Adams Cowley, the man for whom the University of Maryland Medical Center named its shock trauma ward.
Among Daugherty’s other duties as a trooper were serving as sergeant-at-arms in the Maryland Senate, from 1974 to 1984. That assignment called for him to work from Annapolis during the legislative session, and from the Salisbury barracks the rest of the year.
“Being there really taught me so much,” he said of the State House assignment. “You would see them arguing adamantly on the floor, then after the Senate adjourned, you would see them downtown drinking beers together as friends. It taught me you can definitely disagree and still be friends.”
Daugherty served as president of Maryland Troopers Association in the late 1980s, a position to which he returned in 2005, even in retirement, and still holds today.
After leaving the state police, Daugherty was hired as Chief Deputy of the Wicomico County Sheriff’s Office, under Sheriff R. Hunter Nelms. He worked there 11 years.
His next move came as unexpectedly as his transition from X-ray tech to cop: as a driver and security man for poultry mogul Frank Perdue.
“I was ready at that point in my life, I wanted to get away from law enforcement,” Daugherty recalled. “I was talking to the safety manager at Perdue. It was right after Frank had an accident in which he fractured his spine. He said, ‘Frank’s gonna need a driver. Are you interested?’ I said, ‘most definitely.'”
Perdue Farms spokesman Bill See confirmed Daugherty’s employment as Frank Perdue’s personal driver from 2000-2005.
“It started out as a job, but Frank and I became very good friends,” Daugherty said. “I just enjoyed being with him. (His wife) Mitzi (Perdue) and he were both just wonderful people. They didn’t treat me like an employee, they treated me as one of the family.”
In 2007, Daugherty applied for the police chief job in his hometown of Crisfield, but wasn’t hired. Later that year, he ran into Snow Hill Town Manager Kelly Brewington at the annual Crisfield Clam Bake.
That’s where Daugherty’s career took another turn.
“She said, ‘I need a chief of police, and I need one bad,'” Daugherty recalled. “I had worked with the (Snow Hill) mayor, Steve Mathews, in Wicomico; he had been a detective. He said, ‘are you interested?’ I said, ‘yeah, very.’ He said, ‘you got a job if you want it.'”
Daugherty’s connection with Snow Hill goes back many years. In his second year as a trooper, the state police asked him to live in Snow Hill.
“Back then, every little town wanted a state trooper living in their town,” he said. “They would tell you where you were going to be. So I moved to Snow Hill, became active in the community. Became very good friends with a number of people. Belonged to the fire company. Just enjoyed it.”
As for what’s next, Daugherty said he and his wife Susan will spend more time on their boat. He hopes to enjoy a quiet home life in Salisbury, and the pride that comes with taking care of his house, he said.
“If another opportunity comes up, I might pursue it,” he said. “I enjoy helping people. I just feel like it’s time.”