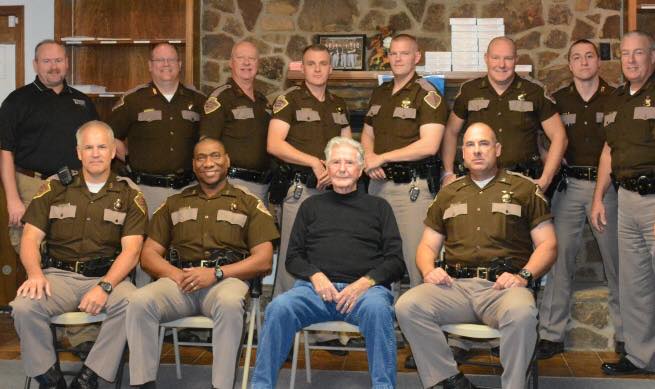 Okay, Trent story of the week, month, whatever…
I get a call a couple of days ago from one of my guys.. He tells me there is a retired Maryland State Trooper that came by the office and wants to meet me.. I ask him why he wants to meet me.. He says the man wants to meet the “Commander” and introduce himself.. He tells me the man’s wife is from Oklahoma and they moved here due to family illness, etc and that he doesn’t know anyone here and is not familiar with the area, so the closest thing he has to family around here are Troopers. I told him I could understand that.. I told him to tell the man I could meet him after lunch at the office, or better yet, have him come to our Troop Meeting on Friday and he can meet all of us.. He tells the man and he says he’ll be there at our meeting. My guy also tells me the man’s pretty old and his wife has to drive him..
Anyway, we start our meeting at 0600 this morning. At 0700 his wife drops him off at our office. He walks in with his Maryland State Trooper hat on and a big folder. My Trooper introduces him to me and he introduces himself as Retired 1st Sergeant Walter S Johnson of the Maryland State Patrol.. We talk for a bit and then I ask him if he would like to talk to the guys. They each introduce themselves to him and he talks to us about his days on the MSP. He started in 1956 and retired in 1983.
After speaking, he wanted us to see the stuff he had in his folder. He had old articles about him, his old MSP license plates, his old badges, etc.. Man he was proud of that stuff and was showing it off like a little kid at show and tell..
We finish and the guys are getting ready to leave. I tell Mr. Johnson to come take a troop pic with us. He takes his hat off, runs his hands through his hair and jumps in for a pic.. We made him an honorary member of our Troop..
As we are getting ready to leave, he tells me it will take his wife about 15 minutes to get there to pick him up.. I tell him no need for that, I’ll take him home.. He lights up and calls his wife and tells her that the “Commander” is going to give him a ride home.. I can hear her on the other end of the phone, all excited about him getting to ride in a patrol car (well…an Explorer) lol.
Anyway, he jumps in and we head down the pike. He is wiping his eyes and we are talking.. I ask him if everything is okay.. He says he would just give anything to go back to the days when he was a Trooper and get in his patrol car each morning and have a purpose every day.. He said not to take being a Trooper for granted and that it goes by in a flash.. He just said he missed it and was looking out the window, but I could tell he was crying.. I asked him what kinds of patrol cars he drove and that got him to really talking.. lol I was trying to get his mind off of being sad.. He said he got one of the first Chevy “automatics” in the early 60’s and he could run down anyone.. said nothing could outrun that car..
Anyway, I finally ask him about how he met his wife. Man, you could tell she was the love of his life.. Only thing I saw perk him up more than talking about his MSP days.. He gave me the rundown about how he met his wife about the time we pulled into his driveway.. His wife came out and I introduced myself.. She said he wouldn’t stop demanding her take him to the local OHP Troop to meet the Troopers. She said he couldn’t sleep last night because he was so excited about the Troop Meeting (Pretty sure he was the only person excited about the meeting) lol. Anyway, I was getting ready to leave and he asked me if I knew how old he was.. I said I had been doing some math in my head about when he retired and how long he said he’d been retired, etc but wasn’t sure the exact number.. He said he was 84. He said he told me that to tell me that in his 84 years, he had seen and done a lot, but there was nothing better than being a State Trooper.. I don’t think I can disagree with him.. Been through, and seen just about everything.. and I wouldn’t change a thing..
Good to remember the folks from the Greatest/Silent Generation and remember those that came before us to give us some perspective on how good we have it, but sometimes get wrapped up with other things and forget to count our blessings..
ALWAYS count your Blessings Folks!!
Thanks to Captain Pettigrew and his staff for making our member and friend feel welcome!