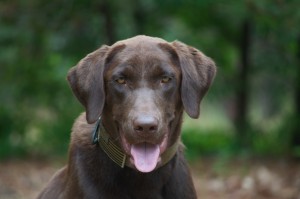 “Muddy” and seven other K-9’s to join the ranks of ‘Maryland’s Finest’
October 28, 2015
Muddy
(Baltimore, MD)  Muddy, and seven of his canine colleagues will share the spotlight with their assigned handlers as they graduate and officially join the ranks of ‘Maryland’s Finest’ tomorrow at Ravens Stadium.
After fourteen weeks of intense training, these unique animals are ready to help keep Maryland safe as they graduate and officially become members of the Maryland State Police K-9 Unit.  With five German Shepherds, one Chocolate Labrador Retrievers and two Yellow Labrador Retrievers, this is one of the largest canine classes to graduate in MSP history.  All eight dogs will be assigned to barracks across the state.  Their duties will include patrol work, explosive detection, interdiction and drug detection.
Many of the graduating K-9’s were donations.  Trooper First Class Doug Deaner’s dog, Reef, was donated by “The Guide Dog Foundation for the Blind”. Other contributors include the Baltimore Ravens Organization, the Catonsville Kennel Club, MTA Lodge 88, the Bel Air Jones Junction Group, and the Queen Anne’s County Drug Task Force.
The Maryland State Police K-9 unit has been in operation for over fifty years.  Since 1961, K-9’s have assisted law enforcement in drug detection, search and rescue missions, explosive detections and with criminal apprehensions.   Currently there are 35 handlers and 46 K-9’s assigned to the Maryland State Police throughout the state.
Following the graduation and K-9 demonstration, a donated 2015 Chevy Tahoe will be presented to the K-9 Unit.  The vehicle was donated by the Veterinary Clinics of America and Dr. Kim Hammond.  It will be used to transport two dogs and will serve as a command post.  It is equipped with cutting edge technology used for searches involving critically missing individuals.
WHAT:           K-9 GRADUATION & DEMONSTRATION, VEHICLE PRESENTATION
WHEN:           THURSDAY, OCTOBER 29TH AT 10:00 A.M.
WHERE:         M & T BANK STADIUM –  Lot E, South East Entrance near Ravens player parking lot
Russell and Ostend Streets
CONTACT:    Elena Russo, Office of Media Communications – 410-653-4236