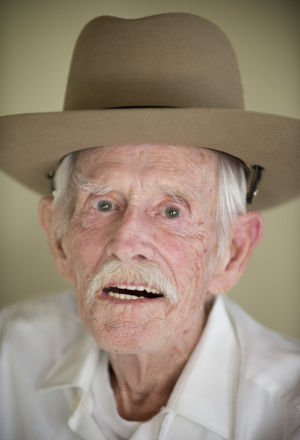 The following article appeared in the Frederick News Post on Friday, May 3, 2013.  If you have ever worked at or have done business with the Frederick Barrack, Junior has helped you more than you will probably ever know.  A well deserved honor indeed.
Posted: Friday, May 3, 2013 2:00 am By Cara R. Anthony News-Post Staff
MIDDLETOWN — A small room in Eugene Appleby’s house tells the story of his time as a radio dispatcher in Frederick County — its walls are covered with old photographs, vintage posters and framed service awards.

The 91-year-old’s collection of private treasures has grown over the years, and on Thursday, Appleby gained one more. During a private ceremony at his home, the Maryland State Police Frederick barrack named Appleby an honorary trooper.

The award is rare and is given out only to those who provide extraordinary service to the department, Lt. Todd May said Thursday.
May presented the award to Appleby along with other troopers from the local barrack. “The Maryland State Police is forever grateful for Mr. Appleby’s service to the Department and it is a great honor and privilege to award him the title of Honorary Maryland State Trooper,” May said in a statement.
On Thursday, Appleby also received a state trooper’s hat to go along with his collection that chronicles his 67 years of service. He officially retired as a radio dispatcher in 1985, but continued to work as a volunteer for 27 more years.
His duties as a volunteer included collating and filing the hundreds of police reports generated every year at the barrack. Appleby has logged more than 5,000 hours of volunteer service, only recently taking a sabbatical to recuperate from an illness.
“The days seemed to go fairly fast then, they don’t go slow like they do now,” Appleby said during an interview.
Now, Appleby spends his days at home visiting with family and friends who affectionately call him “Junior.” His daughter, Gail Matthews, said most people her dad worked with knew him as “Junior” and many people never knew his real name.
“I enjoyed the people I worked with,” Appleby said. “They were all a good people.”
Thursday’s award came as surprise to Appleby. He did not want to take “all of the glory” for his achievement. Instead, Appleby said his work was all about helping the community and could not have been done without the support of his friends.
Over the years, Appleby had support from his family, too. Sometimes working as dispatcher required him to work long hours, especially when there was a disaster or crash in the area.
“I think when he started the typical day was 16 hours, because they just didn’t have the staff back then,” said Appleby’s son, Eugene Appleby.
His dedication continued as a volunteer and when the barrack moved in 2002 to its’ current location, Appleby gave the last radio transmission during the decommissioning ceremony at the former location on West Patrick Street.
“Attention all stations, all cars …” Appleby said as he signed off in 2002.
Before he became a dispatcher, Appleby served in World War II. He is also a long standing member of the Zion Lutheran Church in Middletown.