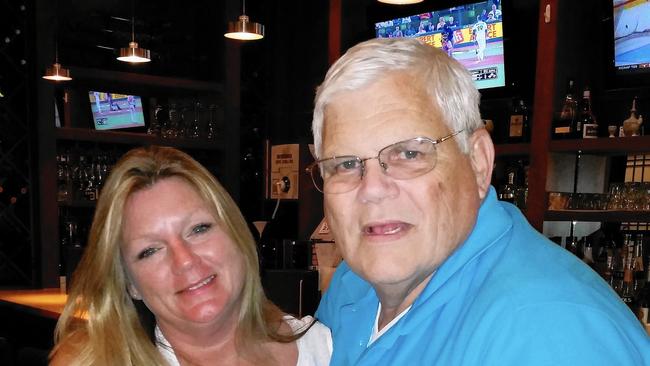 October 7, 2016
Reprinted from The Aegis – Erika Butler   Link to Original Article
Teresa Dietz almost died 45 years ago after she accidentally swallowed some of her mother’s pain medicine when she was 18 months old.
If it hadn’t been for a Maryland State Police trooper who gave her CPR on the way to the hospital, Dietz might not be here.
The past few years, the mother of three and grandmother of two has been thinking quite a lot about that day her life almost ended prematurely, but it wasn’t until last week that she had the opportunity to share her gratitude in person.
Dietz, who was then Teresa Vickery then and living in Aberdeen with her parents, attended a meeting of the Troopers Association Lodge 96 on Sept. 27 at Chop Stix in Forest Hill, where she finally met the man who saved her – George “Howdie” Reith.
Dietz presented him with the article from a newspaper about the incident 45-plus years ago, along with a letter she wrote him. And then she thanked him.
“I feel gratitude, for doing what he did. People like him who are out there every day to watch over us and be there when they’re needed,” Dietz said earlier this week. “I just really appreciate it so much, what he did, because I probably wouldn’t be here.”
Reith, who retired from the Maryland State Police after more than 25 years with the agency, said he vaguely remembers the incident in 1971.
“I remember being in the back seat of a police car giving mouth-to-mouth on the way to Harford Memorial Hospital,” Reith said Wednesday from his Churchville home.
An old newspaper article tells the story of Troopers George Gardner and George Reith who 45 years ago saved the life of a young Tersea Dietz of Aberdeen.
When they got to the hospital, the doctor called for a Medevac to take Dietz to a Baltimore hospital. Reith and Trooper George Gardner, who drove the car, never knew what happened to Dietz afterward. Gardner died in 1999.
“We ran into those incidents every day,” Reith, who works at the Harford County Sheriff’s Office Southern Precinct on Saturdays and Sundays for “spending money,” said.
Meeting Dietz for the first time last week brought back memories.
“It was very surprising to me. It makes me feel appreciated knowing I helped save her life,” he said.
Dietz doesn’t remember the incident, only the details in the newspaper clippings, which her mother kept tucked inside a Bible for years.
“Sometimes growing up I would see it, it was pretty cool,” Dietz said.
Her mother died in 1999 and Dietz became the keeper of the Bible that contained the article. As she’s gotten older and had children and grandchildren, she’s appreciated what Reith did all that much more.
“Now, with maturity comes appreciation, and we realize the precious things in life. Today I have a great life, a wonderful husband, three great kids and two amazing grandkids, and I can honestly say none of that would be possible without people like you,” Dietz wrote in her letter to Reith. “Although 45 years later, I needed you to know that what you did for me and my family has NEVER went unnoticed, and I thank you with all my heart.”
For a few years she had been thinking about getting in touch with Reith, but didn’t really decide to do it until recently.
“Just in light of everything that’s going on with police and how they’re being treated today, I have a whole different perspective on that,” she said. “Every now and then they need to be recognized for what they do.”
Dietz is glad she reached out to Reith.
“I feel really good about it, to be able to thank him. I feel like they don’t get that gratitude all the time, especially for something that happened so long ago. He probably never thought about it, he just did it,” she said. “It’s not something I did for me, it’s something I did for someone else.”