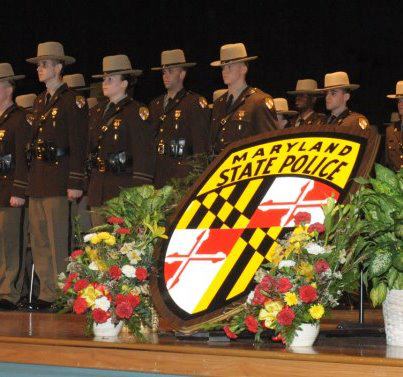 After 26 weeks of rigorous academic and physical training in the Maryland State Police Academy, 50 new troopers marched across the stage to accept their diploma from Lt. Governor Brown and their new gold badge from Colonel Brown. Family and friends, along with their fellow troopers witnessed the graduation of the 139th Trooper Candidate Class at Century High School in Sykesville.

“Public safety is the most important service and responsibility of government, and that service would not be possible without the work done each day by the brave men and women of the Maryland State Police,” said Lt. Governor Anthony Brown. “I want to congratulate all of the members of the 139th Trooper Candidate Class, and thank them for their dedication to the safety of citizens throughout our state.”

After acknowledging the ongoing commitment of the O’Malley-Brown Administration to improving public safety, Colonel Brown reminded the new troopers of the level of sacrifice it will take to succeed in their chosen profession. “It requires leaving your friends and families on weekends or forfeiting that gathering or holiday event to serve and protect,” Colonel Brown said. “When you take the oath to become a Maryland State Trooper, the uniform you wear is with you 24 hours a day, seven days a week, even when you are off duty.”

The 42 men and eight women in the 139th Trooper Candidate Class make up the most diverse class in Maryland State Police history. This class includes seven military veterans, two prior police officers and two paramedics. Also in this class, there are ten new troopers who are following in the footsteps of family members. The class set amazing standards for charity involvement and support during their six months of training. They raised more than $16,000 to support Special Olympics of Maryland and $2,500 for Autism Awareness.

The new troopers will report for duty to one of 22 barracks across Maryland after a few days off. They will be assigned to a field training trooper and begin another eight weeks of closely supervised training and instruction before being allowed to patrol on their own.