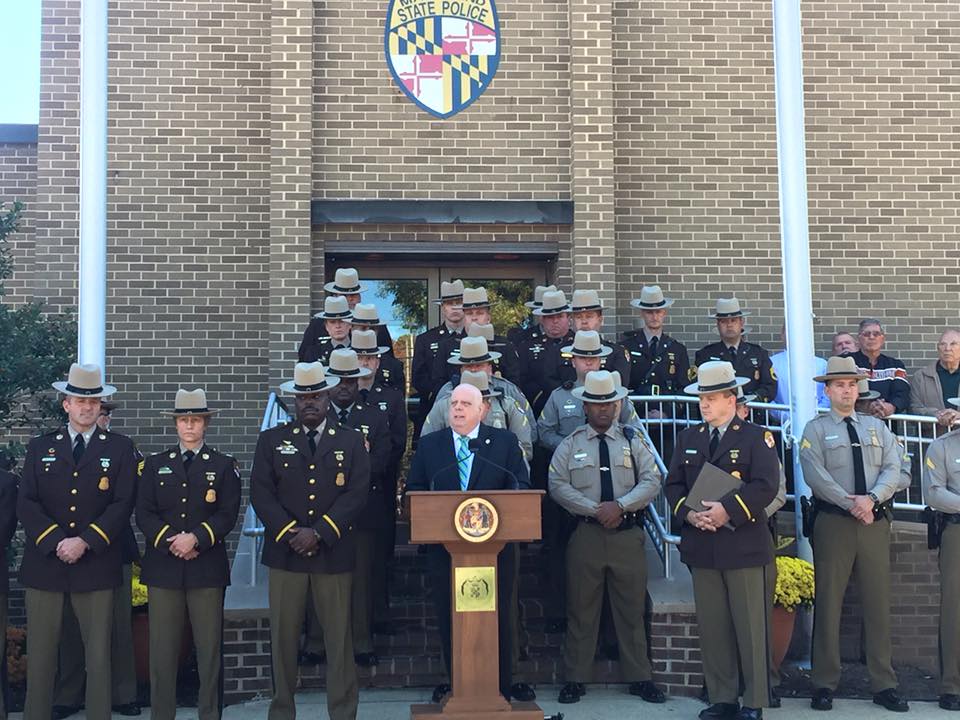 This morning I was proud to announce the official reopening of the Maryland State Police barracks in Annapolis. During the campaign and in my administration I have maintained it was a mistake to close this barrack and lose our state police presence in our capital city. Our Maryland State Police put their lives on the line for our state and our citizens every day, and they deserve the full support of our state government.

November 3, 2015
For immediate release:
November 3, 2015
Contact:
Erin Montgomery erin.montgomery@maryland.gov
Eric Shirk eric.shirk@maryland.gov
410-974-2316
ANNAPOLIS, MD – Governor Larry Hogan today joined Maryland State Police Superintendent Colonel William Pallozzi to officially reopen the Maryland State Police Annapolis Barrack. To mark the occasion, the governor presented Colonel Pallozzi with keys to the barrack, in front of an audience that included retired and current troopers who had previously worked at the barrack, as well as other local and state allied law enforcement officials.
In reopening the barrack, Governor Hogan fulfilled a promise made during the 2015 legislative session, and reaffirmed the administration’s commitment to making sure that the Maryland State Police remains among the most effective, trusted, and respected police force in the United States. Earlier this year, Governor Hogan also budgeted for the State Police to hire 100 new troopers, 50 of whom are currently in training.
“Our administration is committed to making sure Maryland’s Finest have all the resources they need to continue their excellent service,” Governor Larry Hogan said. “Reopening Barrack ‘J’ is a step in the right direction, and I look forward to it being fully operational and actively serving the citizens of Annapolis and the state at-large.”
Governor Hogan originally announced the administration’s plan to reopen the barrack at Colonel Pallozzi’s swearing-in ceremony in March. Today’s announcement marked the beginning of Maryland State Police around-the-clock operations at the Annapolis barrack. Road patrol troopers, criminal investigators, and other State Police personnel are currently working out of the barrack, and a duty officer is now present at the barrack at all times. Although the Annapolis barrack was first opened in 1972, it was later closed in 2008 by the previous administration.
“Thank you, Governor Hogan, for your commitment to returning the Annapolis barrack to the Maryland State Police,” Colonel Pallozzi said. “We will work quickly to re-establish our presence in this facility, making certain we are efficient in our expenditures and wise in the assignment of appropriate resources. The men and women who staff this barrack will put service above self and continue to uphold the tradition of outstanding law enforcement service the Maryland State Police has been known for during the past 94 years.”
Governor Hogan and Colonel Pallozzi also reminded members of the Maryland State Police of their vital role in statewide public safety efforts, especially in providing support for local law enforcement when needed. So far this year, state troopers have made more than 12,600 criminal arrests and an additional 2,200 arrests for drug crimes. Troopers have arrested almost 5,700 impaired drivers and made more than 473,300 traffic stops. State Police have recovered 1,750 firearms during arrests and criminal investigations.
The initial rehabilitation of the barrack has been conducted by the Maryland Department of General Services. Equipment, including communications gear, as well as computer and phone systems, has been installed. The radio dispatch of troopers from the new Annapolis barrack will continue to be done through the Glen Burnie barrack, as a cost-saving measure.
Personnel currently assigned to the Glen Burnie barrack who patrol southern Anne Arundel County are the first to begin using the barrack. Additional personnel will be assigned in the months ahead as a full command and supervisory staff is put in place. A full staff of approximately 33 troopers is expected to be working at the Annapolis barrack within one year.