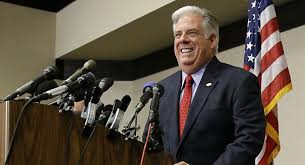 Governor Hogan’s Supplemental Budget has been released with considerable funding for Maryland State Police – Personnel, Equipment and the Reopening of Annapolis Barrack. Funding also provided for tax relief for military and first responders.

ANNAPOLIS, Md. —Maryland Gov. Larry Hogan has released a supplemental budget that includes money for some tax-relief plans he is supporting.
The plan made public Thursday includes $5.2 million to provide tax relief on military pensions and relief for first responders. It also includes $7.4 million for personal property tax relief that would eliminate the tax for businesses that have less than $10,000 in personal property.
PDF: Governor’s supplemental budget plan
The Maryland State Education Association criticized the plan for failing to include about $70 million in public school education funding the Legislature restored from Hogan’s initial budget proposal in January. A Hogan spokesman says negotiations will continue.
The governor released the plan as House and Senate negotiators begin work on reconciling differences in the $40 billion state budget as approved by the two chambers so far.