Commemoration of the 40th Anniversary of L.O.D.D. of Sgt. Wallace J. Mowbray 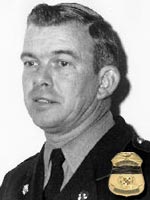 Please join the command & staff of the Centreville Barrack on Sunday, August 9, 2015 at 11:00 AM to commemorate the 40th anniversary of the line of duty death of Sergeant Wallace J. Mowbray. The program will be held at the Centreville Barrack, 311 Safety Drive, Centreville, MD.
Please RSVP to Sergeant James Coppage by August 1, 2015 by e-mail james.coppage@maryland.gov or by phone at 443-480-1689.  Light refreshments will be served following the service
Posted: Monday, August 3, 2015 4:30 am
By JACK SHAUM jshaum@kibaytimes.com
CENTREVILLE — It was 40 years ago to the day this coming Aug. 9 that Maryland State Police Sgt. Wallace Mowbray was shot and killed while on duty in Chester.  State troopers, members of the Mowbray family, and others, will gather at the Centreville Barrack at 11 a.m. on Sunday, Aug. 9 to honor Mowbray. The ceremony, which is scheduled to take place outside the barrack, is open to the public, according to Lt. Timothy McDonald, barrack commander.
Mowbray was on patrol in Chester on Aug. 9, 1975 and was investigating a suspicious vehicle in a parking lot at Postal Road and Cox Neck Road when he was shot. He was checking a license plate over the radio when he was hit by a shotgun blast, according to Officer Down Memorial Page, a non-profit organization dedicated to honoring fallen law enforcement officers. The license plates turned out to be stolen, the organization said.
Four people were arrested and convicted in Mowbray’s death. He was the third Maryland State Police trooper to be shot to death in the line of duty and the 24th to die while on duty, according to an article in the Bay Times of Aug. 13, 1975.
The shooting stunned the community. Workers at the Circle Restaurant called it “the worst thing to happen in this community ever,” according to the article. “There just isn’t enough good can be said about him. Just a great guy, and a great cop,” said Wheeler Baker, owner of Baker’s Liquor Store. Filling station operator Jay Lowery called the shooting a “terrible shame” and said “Kent Island has lost a good man,” the newspaper reported.
Hundreds of police officers, the governor, the attorney general, the comptroller, and many other dignitaries attended Mowbray’s funeral at the Kent Island United Methodist Church, where the Rev. Roy Phillips said that he was “not only a good police officer, he was a man of the highest character.”
Ten years ago, a monument in Mowbray’s memory was erected on the front lawn of the Centreville barracks and the Wallace J. Mowbray Memorial Award was created in his honor to recognize the achievements of local outstanding law enforcement officers. It has been awarded each year since 1992.
Troopers and others from the Centreville barracks recently prepared the grounds for the Aug. 9 event, many of them contributing their own equipment and time to do the work. McDonald said the work consisted of such things as landscaping, weeding, tree trimming, and painting curbs and parking lot lines.