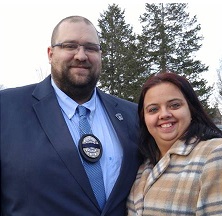 A benefit bull roast will be held in support of Officer Jason Easton of the Aberdeen Police Department on Sunday, October 22, 2017 from 4:00 – 8:00 PM at the Richlin Ballroom, 1700 Van Bibber Road, Edgewood, Maryland 21040.  The cost is $50 per person.  Menu will include Colorado Style Beef, Oven Glazed Ham, & Roast Turkey with all the trimmings.  Beer and Wine included.  A cash bar will be available for mixed drinks.

Background from Sponsoring Organization – LEO Wives Have Your 6
On December 4, 2015, Officer Jason Easton of the Aberdeen Police Department was ambushed while responding to a call.  He was shot in the face and neck area by buckshot from a shotgun.  Multiple pellets hit him, one lodging in his left eye.  Although remaining optimistic, at this time doctors believe that Jason will not gain any sight back in the injured eye.
Jason had remained hopeful that he would be able to return to duty and serve the community he lives in while doing the job he loved.  In April, he was released from doctors with permission to return work.  Through no fault of his own, he has not been able to return to the Aberdeen Police Department.  Since that time, Jason has been receiving no pay, no workman’s compensation payments and although he is still in the process of appealing a decision to rule his injury non-catastrophic so he can receive the proper amount of retirement funds.
Jason has a wife and four beautiful children.  They are active the community.  They attend a local church and are involved with their children’s school.  They are in need of our support as they navigate through this time of unemployment and an uncertain future.  As a community, we will rally around them to give them the help they shouldn’t require, but need.  Contact leowiveshaveyour6bullroast@gmail.com for more information and tickets.
Flyer