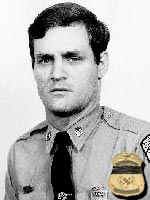 Maryland State Police Press Release
03/27/2015 08:09
TROOPER’S LEGACY LIVES ON AFTER HIS ULTIMATE SACRIFICE 25 YEARS AGO
(PIKESVILLE, MD) – When the members of Trooper Candidate Class 143 hold a special ceremony early this afternoon at the State Police Academy, they will honor and remember a state trooper who gave his life in the line of duty before many of them were born, but whose legacy continues to inspire the men and women of the Maryland State Police.
Corporal Theodore D. “Ted” Wolf, 40, a 16-year veteran of the Maryland State Police, was shot and killed early on the morning of March 29, 1990. Assigned to the Waterloo Barrack, Corporal Wolf was patrolling I-95 near Rt. 175, when he stopped a vehicle for speeding. He did not know the vehicle was stolen and occupied by two career criminals who had recently been convicted of armed robbery and were due to start their sentences in a few days.
At about 4:00 a.m. that day, an off-duty Washington, D.C. Metropolitan Police officer stopped when he saw the patrol car on the shoulder with its emergency lights on and no other vehicle around. He found Cpl. Wolf in the front seat of the patrol car. Following an intense and extensive investigation, the two suspects were arrested and convicted of the murder of Cpl. Wolf.
Cpl. Wolf left behind his wife, Ginni, his sons, Ted, Greg, and Nick, and his parents, Jane and Leroy. Among the thousands of mourners who visited the funeral home were President George H. W. Bush and his wife, Barbara. Lt. Robert Johnson, commander of the Waterloo Barrack at the time, said President Bush told Cpl. Wolf’s sons “….they should be proud of their dad because he was in law enforcement and that these days, it’s a particularly important career.” Lt. Johnson said the President left the funeral home with tears in his eyes.
Cpl. Wolf began his training at the Maryland State Police Academy in January, 1974, as a member of the 72nd Trooper Candidate Class. Members of his class remembered him as ‘one of the most athletic persons’ they had ever seen. His first son, Ted Jr., was born while Cpl. Wolf was in Academy training at the firearms range.
Cpl. Wolf’s file was full of commendations and letters of appreciation. His work ethic was unequaled and his example was followed by the troopers he supervised, the other troopers at the Waterloo Barrack, and troopers throughout the Department. When he was not working, Cpl. Wolf was spending time with his three sons, or playing softball with the Maryland State Police softball team.
His performance as a trooper earned him nominations that included Trooper of the Year, a lifesaving award, Maryland State Police Alumni Association Trooper of the Year, Maryland Law Enforcement Officer Association Police Officer of the Year, and multiple Employee of the Month awards at the barrack. In February 1990, Lt. Johnson nominated Cpl. Wolf for the Baltimore Evening Sun’s Police Officer of the Year Award. Cpl. Wolf attended the Evening Sun’s award ceremony on March 25th, four days before he was murdered.
Although Cpl. Wolf only served 16 years as a trooper before his life was taken, his example and memory have never stopped inspiring the men and women who have worn the same uniform since. Just yesterday, Colonel William M. Pallozzi took the oath of office as Superintendent of the Maryland State Police. Colonel Pallozzi was assigned to the Waterloo Barrack when he graduated from the State Police Academy in 1989. To this day, he remembers instruction and guidance given to him by Cpl. Wolf and the influence Cpl. Wolf’s work ethic had on him. Colonel Pallozzi also remembers talking with Cpl. Wolf and other troopers that night during a shift change as he went off duty. Hours later, then Trooper Pallozzi would be recalled to duty to assist in the investigation of Cpl. Wolf’s murder.
The current commander of the Waterloo Barrack, Lt. Shane Bolger, was just 15 when Cpl. Wolf was killed, but he clearly remembers when it happened. “He set the example for young troopers like me, when I graduated in 1996,” Lt. Bolger said. “Cpl. Wolf was supposed to be off the night he was killed. He said he had to come in for duty because that was the first night the new trooper he had just trained would be patrolling on his own. You don’t often see that type of connection, dedication, and devotion.”
Cpl. Ted Wolf, a loving husband, father, and outstanding Maryland state trooper, gave his life while serving the citizens of this state 25 years ago. He has not been forgotten by his fellow troopers. His memory is carried in their hearts each day as they work to serve and protect our citizens, while upholding the legacy of “Maryland’s finest.”