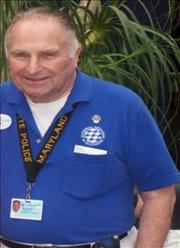 We regret to inform you of the death of Volunteer in Police Support Jay Bondar on Wednesday, October 7, 2015.  Our thoughts and prayers are with Jay’s family and friends.  The following obituary information has been reprinted from the Simplicity Funeral Home website.  At Jay’s request no services are scheduled but condolences can be left at:
http://simplicitycfs.com/book-of-memories/2266060/Bondar-Jay/view-condolences.php
Our Dad and Poppy, Jay Bondar, passed away on Wednesday, Oct. 7, 2015. He was born in Brooklyn, New York on June 16, 1928. He graduated from Brooklyn College and was presented in Who’s Who in American Colleges and Universities. He was also a World War II Navy Veteran. Poppy spent 41 years of his life as a business professional in Baltimore. The last 10 years were spent as a substitute teacher in Baltimore County and as an Official Guide at the National Aquarium.
We would however like Poppy to be remembered for all his charity work. He spent 23 years as a Volunteer in Police Support for the Maryland State Police. He helped organize and participated in the Shop with a Cop for Christmas including shopping with the children. In addition he was heavily involved in the training classes for the Maryland State Police Trooper academy and loved attending the Graduation Ceremonies. Poppy also supported the Preakness Stakes Run and many other Charities and organizations throughout the years.
Everyone who met him loved him because he made everyone feel like they mattered. He never missed a birthday or holiday greeting. He lived life with an open heart and an open home.
He was predeceased by the love of his life, wife Barbara. He is survived by daughter, Rhea Bondar-Safford of Boise, Idaho, son Stace Bondar (Terry) of Owings Mills, grandchildren, Mason Yant, Boston, Ma., Courtney Yant-Haug (Fred), Phoenix, Az., Ashley Bondar-Johnson (Lee), Key West, Fl., Sydney Bondar, Owings Mills and Katelin Safford, Annapolis. He is also survived by two great grandsons, and many nieces and nephews whom he loved dearly.
Poppy was a true gentlemen, a class act with a kind soul. He meant so much, to so many and will be dearly missed. Your impact on our lives and the world will never be forgotten! At Poppy’s request there will be no services, please cherish and embrace all the wonderful memories he leaves us with.