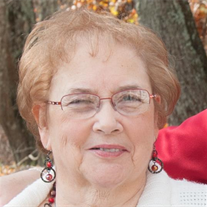 We regret to inform you of the death of Virginia /Jenny/ S. Pearre, mother of 1/Sgt. Bryan A. Pearre,  on October 22, 2016.  Our thoughts and prayers are with the Pearre family at this difficult time.  The following obituary information has been reprinted from the Haight Funeral Home website.
Virginia “Jenny” Sallie Pearre, age 67, of Westminster, passed away on Saturday, October 22, 2016, surrounded by her family at St. Catherine’s, Emmitsburg, MD.
Born December 9, 1948, in Baltimore, MD she was the daughter of the late William Thomas Justice, Sr. and Virginia Frances Richeson Justice. She was the wife of William Earl Pearre, whom she married in August of 1969.
Jenny had worked as a registrar for Carroll Community College for several years. She enjoyed playing the piano, Christmas and Christmas music, baking and especially spending time with her family.
Surviving in addition to her husband are daughter and son-in-law, Jennifer E. Pearre-Crago and Max Crago; sons and daughters-in-law, Christopher T. and Tina Pearre, Bryan A. Pearre and William G. and Shelly Pearre; brother and sister-in-law, William T. and Janet Justice and grandchildren: Leah, William, Katelyn and Ethan.
A memorial service will be held on Tuesday at 2pm at Haight Funeral Home & Chapel, 6416 Sykesville Road, Sykesville. The family will receive friends one hour prior to the service at the funeral home. Interment will be private.
In lieu of flowers, memorial donations may be made to the American Diabetes Association, PO Box 11454, Alexandria, VA 22312 or Diabetes Association Website