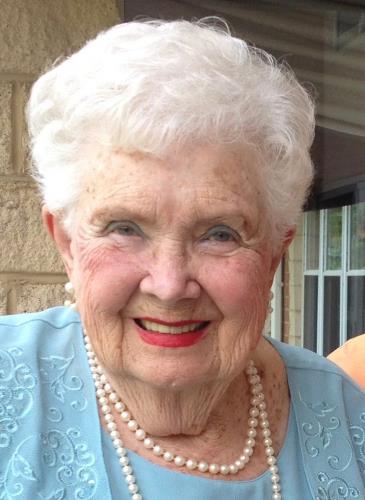 We regret to inform you of the death of Virginia “Ginney” L. Smith, widow of Retired Colonel Thomas S. Smith on January 22, 2017.  Our thoughts and prayers are with Ginney’s many friends and family at this difficult time.  The following obituary information has been reprinted from the Capital Gazzette.

January 11, 1922 – January 22, 2017 Virginia Lorraine Schmidt Ehreke Smith, 95, of Annapolis died Jan. 22, 2017 at Baywoods of Annapolis.
A lifelong resident of Anne Arundel County, Ginnie was born Jan. 11, 1922 to George and Margaret Schmidt and lived her early years on the family farm on Mountain Rd. in Pasadena. She was a 1938 graduate of Glen Burnie High School and attended Anne Arundel Community College. In 1942 she married G. William R. Ehreke, Jr., a 1942 graduate of the U.S. Naval Academy. As a Navy wife, Ginnie traveled with her husband, living in California, Washington, Texas and Florida. Ginnie and Bill had two children during their 33-year marriage, Scott L. Ehreke (Susan) of Yukon, OK and Pamela E. Mayberry (Wade) of Annapolis. Bill passed away in 1975. During Ginnie’s business career, she worked in many administrative positions for elected officials in both the Maryland State Senate and House of Representatives. She also worked extensively in the local banking industry, holding positions with the former Equitable Trust Co., the Colonial Bank and Trust Co., and the Suburban Trust Co. where she developed the bank’s Chesapeake Oyster Cooking and Shucking Contest, a precursor to today’s Maryland Seafood Festival. Prior to beginning her professional career, Ginnie worked on the farm and also drove an ambulance for the old Water Witch Fire Station of Annapolis and for the American Red Cross Motor Corps during World War II. She also worked as a secretary at the famous Trumpy Boatyard from 1943-44, where they built PT boats for the war effort. In addition to her career, Ginnie was active in numerous civic organizations including the Lake Shore Inner Wheel, the Glen Burnie Inner Wheel, the Crosswinds Garden Club, the USNA Women’s Golf Assoc., the USNA Class of 1942 Assoc., the Annapolis Yacht Club and the Naval Academy Women’s Club. Ginnie also participated in national and local political races including working on the presidential campaigns of Adlai Stevenson, Stuart Symington, John F. Kennedy and Lyndon B. Johnson. In Maryland, she worked for Louis L. Goldstein’s U.S. Senate campaign as well as Harry C. Byrd’s gubernatorial run. In 1977,
Ginnie married Col. Thomas S. Smith, Superintendent of the Maryland State Police. During their 28 years of marriage, Ginnie and Tom traveled extensively and lived in Heritage Harbor in Annapolis. Tom died in 2005. Tom had two children, Thomas Smith, Jr. and Barry Smith (Carolyn) and one grandchild, Alexander. In addition to her children, Scott and Pamela, Ginnie is survived by two sisters, Eileen Lucke (Ronald Stephens) of Sarasota, FL and Alice Marie Shipley (William) of Fallston, MD; two granddaughters, Kim Hulett (Michael) of Lady Lakes, FL and Kelly Beninghove (Jeffrey) of Towson, MD; and two great granddaughters, Soleil and Leila Beninghove of Towson, MD.
A visitation will be held from 2-4 PM and 6-8 PM on Monday, January 30th at John M. Taylor Funeral Home, 147 Duke of Gloucester St., Annapolis, MD. A memorial service will be conducted at the U. S. Naval Academy Main Chapel at 10:30 AM on Tuesday, January 31st followed by inurnment at the U.S. Naval Academy Columbarium.
In lieu of flowers, memorial contributions may be made to Providence Center, 930 Point Pleasant Road, Glen Burnie, MD 21060 or National Multiple Sclerosis, Society Greater DC – Maryland Chapter, PO Box 1876, Baltimore, MD 21203-1876.