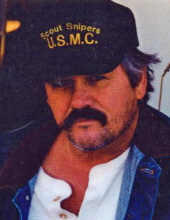 We regret to inform you of the death of Retired TFC Robert I. Rikard on Sunday, November 26, 2017.  Our thoughts and prayers are with his family and friends at this difficult time.   The following obituary information has been reprinted from the Waller Funeral Home website.  Condolences
Obituary for Robert Irby Rikard
Robert Irby Rikard, 71, died Sunday, November 26, 2017, at the MS State Veterans Home in Oxford, MS.  A memorial service will be held Thursday, November 30, 2017, at 2:00 P.M. at Yellow Leaf Baptist Church, 50 CR 435, Oxford, MS 38655 with Rev. David Ard officiating. Visitation will begin at 12:00 p.m. prior to the service at the church. Waller Funeral Home is in charge of arrangements.
Born in Oxford, MS, to the late Robert L. and Madge Irby Rikard, Mr. Rikard was a retired State Trooper in Maryland and worked with the Tactical Unit.  He was a Sergeant in the United States Marines Corp and served during the Vietnam War.  He was preceded in death by his parents, his wife, Sherrie Sam Rikard and a brother, Peanut Rikard.
Survivors include: son, Robert Shawn Rikard (Karla) of Pasadena, MD; sisters, Marie Moore of Flippin, AR, Charlotte Ash (Ronnie) of Etta, MS and Betty R. Grant (Mike) of Oxford, MS; two grandchildren and one great grandchild.
Memorial contributions in Mr. Rikard’s memory may be made to Maryland Troopers Foundation, 1300 Reisterstown Road, Pikesville, MD 21208.