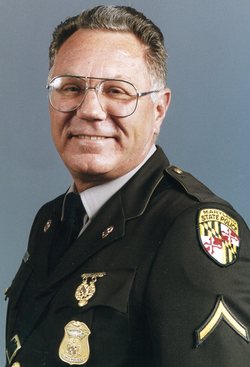 We regret to inform you of the death of Retired TFC Larry T. Karnes on November 25, 2013 following a long and hard fought battle with cancer.  Our thoughts and prayers are with Larry’s family and friends at this difficult time.  The following arrangements have been reprinted from the Parsell Funeral Home website.

LARRY TERRELL KARNES
May 5, 1949 – November 25, 2013
Larry Terrell Karnes, age 64 of Seaford, Delaware passed away on Monday, November 25, 2013 at his home surrounded by his loving family and friends. He was born in Princeton, West Virginia on May 5, 1949, son of the late Houston Sr. and Geraldine (Mitchell) Karnes.
Mr. Karnes served his country proudly in the Army National Guard from 1968 to 1974. Since 1970, he became a long time member of the Moose Lodge 1456. Mr. Karnes dedicated himself to become a Maryland State Trooper and after 27 years of service, he retired in 2004 as a Trooper First Class. During his many devoted years of service, Mr. Karnes received the Baltimore Sun Trooper/Officer of the Year and the Forestville Trooper of the Year awards.
Mr. Karnes was a native of Glen Burnie, MD for over 40 years, and his family relocated to Delaware in 2007. Larry enjoyed gardening and spending time at the beach with his loving wife, Tammy. He was an avid hunter and seasoned marksman. From his younger years driving in demolition derbies, Mr. Karnes continued to enjoy working on cars and riding his motorcycle. During the summers, Mr. Karnes family favorite place to vacation was traveling to Nags Head, NC. Mr. Karnes will be remembered as a devoted husband, father, grandfather and a dear friend by all who knew him.
Mr. Karnes is survived by his loving wife of 21 years, Tammy A. Karnes; his three daughters: Lori Noel and her husband Michael of Charles Town, WV, Kelly Blades and her husband Danny of Glen Burnie, MD and Crystal Karnes of Seaford, DE; his grandchildren: Landon Thomas of Glen Burnie, MD and Braelyn Blades of Glen Burnie, MD; and a brother, Houston “Sonny” Karnes Jr. of Pasadena, MD.
Memorial Services will be held on Saturday, December 7, 2013 at 3:00 PM at Parsell Funeral Homes & Crematorium, Hardesty Chapel, 202 Laws Street, Bridgeville, DE, where friends may visit beginning at 1:00 PM. Interment will be private.
Memorial contributions in Mr. Karnes memory may be made to The Cares Program, Shore Regional Cancer Center, Attn: Brian Leutner, 509 Idlewild Avenue, Easton, MD 21601.
Please visit Mr. Karnes guestbook.
VISITATION
Saturday December 7, 2013, 1:00 PM – 3:00 PM at Parsell Funeral Homes & Crematorium
Click for Map and Directions
MEMORIAL SERVICE
Saturday December 7, 2013, 3:00 PM at Parsell Funeral Homes & Crematorium
Click for Map and Directions
INTERMENT – PRIVATE