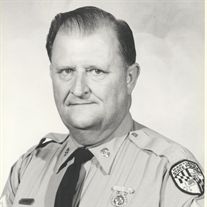 William Elton Jones, 81, of Linthicum, passed away on January 11, 2015. He was born in Stockton, Maryland, on December 8, 1933 to the late Elton and Montrue Jones. William served his country in the Army National Guard, and then went on to serve the State of Maryland as a Sergeant in the State Police for over 30 years. He enjoyed gambling, traveling, and spending time at the Pascal Senior Center.
William was predeceased by his devoted wife of 50 years, Ann Jones and his dear sister, Virginia Mariner. He is survived by his cherished fiance’, Shirley Bauer and his loving sister, Linda Rawls.
Visitation will be held on January 15, 2015 from 2:00 – 4:00 PM and from 6:00 – 8:00 PM at Singleton Funeral and Cremation Services, PA, 1 2nd Avenue SW, Glen Burnie, MD, 21061
A Funeral Ceremony will be held at the Singleton Funeral Home on January 16, 2015 at 10:00AM