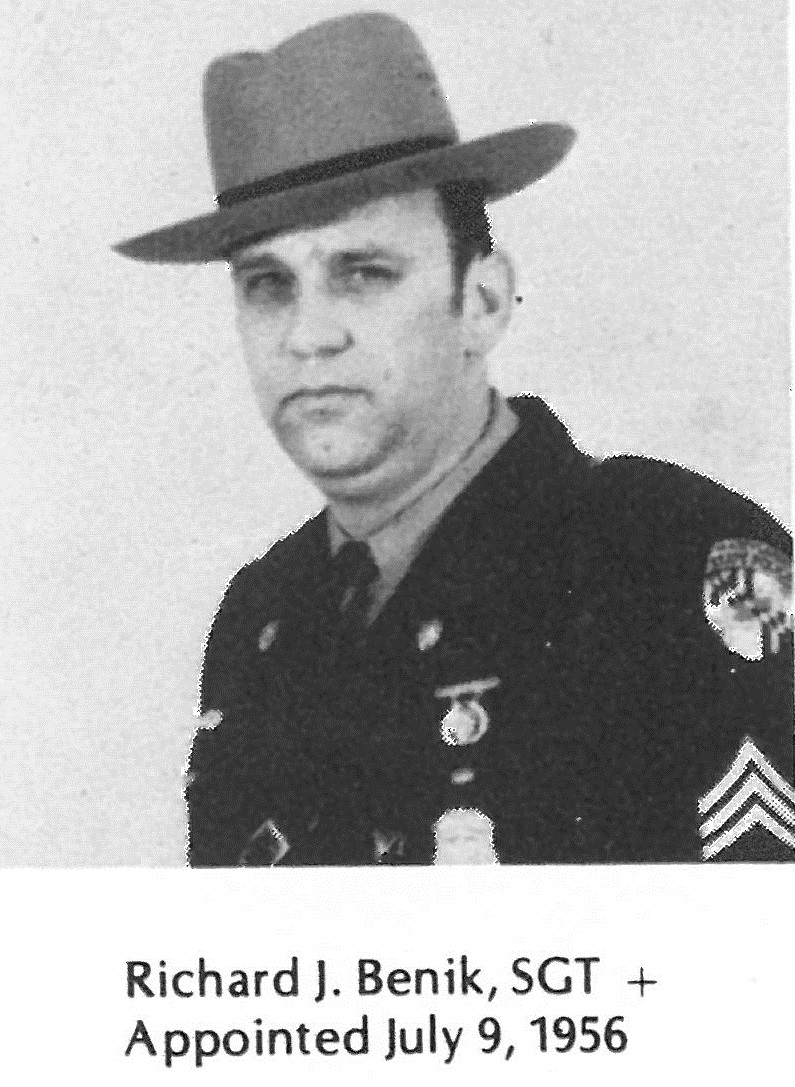 We regret to inform you of the death of Retired Sergeant Richard J. Benik on Friday, September 18, 2015.  Our thoughts and prayers are with his family and friends at this time.  The following obituary information has been reprinted from the Barranco and Sons Funeral Home website.

Richard J. Benik
(February 15, 1935 – September 18, 2015)
Richard J. Benik
Richard J. Benik passed away in his home on September 18, 2015 in Crownsville, MD at the age of 80.
Mr. Benik was born on February 15, 1935 in Baltimore, MD to the late Stanley and Margaret Benik, Sr. He graduated from Glen Burnie High School in 1954. He married Evelyn Benik (Revnoc) on September 15, 1956 in Baltimore, MD. Mr. Benik joined the Maryland State Police Academy and graduated in December 1956. He served as a Maryland State Trooper for 28 years before retiring in 1984 as a Sergeant. He then went on to have an accomplished career in kitchen design for over 25 years. Richards’s passions included devotion to his family, helping others and listening to bluegrass music.
Richard is survived by his loving wife of 59 years, Evelyn; and a loving family including daughter Teresa and husband Steve Semonick, son Richard and wife Kim Benik, daughter Bernadette and husband Dennis Seymour. He was loved and adored by his grandchildren Stephen Semonick and Christa Shriner and Kelly and Kathleen Benik.
Family and Friends can pay their respects at Barranco & Sons, P.A. Severna Park Funeral Home 495 Ritchie Hwy, Severna Park, MD 21146 on Tuesday, September 22, 2015 from 2:00 to 4:00 pm and 6:00-8:00pm. A Mass of Christian Burial will be celebrated on Wednesday September 23, 2015 at 10:00am in Our Lady of the Fields Catholic Church 1070 Cecil Avenue South, Millersville, MD 21108. Interment to follow in the church’s cemetery.
In lieu of flowers, donations may be made in memory of Richard Benik to Alzheimer’s Association Greater Maryland, 1805 York Road, Suite D, Timonium, MD 21093.