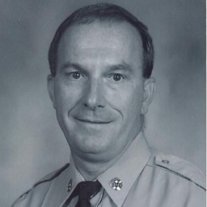 We regret to inform you of the death of Retired Sergeant William E. Smith on September 28, 2013.  Our thoughts and prayers are with his family and friends at this difficult time.  The following obituary information has been reprinted from the Funeral Home website.
FEDERALSBURG – William Everett Smith of Federalsburg, MD passed away on Saturday, September 28, 2013 at Nanticoke Hosptial in Seaford. He was 61.  He was born on June 11, 1952 in Easton, the son of Doris Medford Smith of Seaford and the late Lawrence Everett Smith.
Bill was a graduate of Colonel Richardson High School Class of 1970. He served his country in the United States Air Force. He retired from the Maryland State Police and was currently working for the Talbot County Sheriff’s Department. He was a member of the Maryland Troopers Alumni Association, the American Legion Post 29 in Denton and the V.F.W. Post 5246 in Federalsburg. One of his favorite places to vacation was Aruba.
Besides his mother he is survived by his wife of forty-one years, Carol A. Hamilton Smith, a son, Eric Smith and his wife Amy of Federalsburg, a sister, Violet Tengman and her husband Tom of Seaford, a half-brother, Ronald Medford of California, thirteen grandchildren, Ashley, Christopher, Jonathan, Abigail, Victoria, Steven, Ryan, Alyssa, Derrick, Domnique, Cassidy, Sarah, Patrick and a great-granddaughter, Jaila Rae, his loving dog, Mindy Sue, his beloved cat, Lily May, and numerous aunts, uncles, nieces, and nephews. He was also preceded in death by his son, Troy Steven Smith and a brother, Garry Smith.
Funeral services will be held on Wednesday, October 2, 2013 at 8 p.m. at Framptom Funeral Home, in Federalsburg with Rev. Denzil Cheek officiating. Friends may call at the funeral home on Wednesday from 6-8 p.m. Interment will be private.
Memorial contributions may be made in his memory to the Maryland Troopers Assocation, Inc. 1200 Reistertown Road, Pikesville, MD 21208.
To share memories with the family, please visit www.framptom.com.