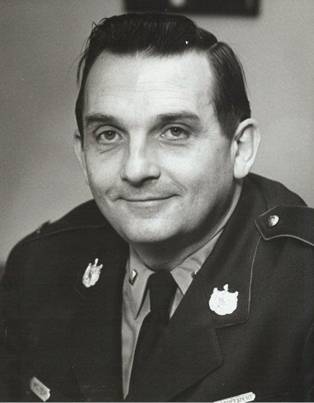 Major/Sheriff Ted Moyer passed away Monday night at home at 7:35 PM .  My mother Elaine, brother Dave, sister in law Mary, and I were with him when he passed.  My brother Mike and the rest of our immediate family joined us at Mom’s house to be together and pray as a family.  Long time friend and almost adopted son Greg Pessagno and Pastor Art Justice joined the family at the house.

Major, Sheriff, Mr Ted, Coach, Ted, Teddy Bear, and Teddy grew up in Hagerstown but came to Harford County in 1951 as a trooper with the Maryland State Police.  Ted retired as a Major in 1981 and was the Harford County Sheriff until 1986.   Dad did so much to keep Maryland and Harford County safe over the years for many.  He dedicated his life to helping youth in Harford County by coaching, leading, and mentoring 100’s.  He loved the Baltimore Colts, Baltimore Orioles, and Baltimore Ravens.

Ted loved his family and raised three boys who grew up in the Edgewood community and learned the values of good, honest, family living.  Ted loved his grandchildren Dani, Kyle, Drew, and Kelsey.

A career cop who always looked out for the road patrol trooper or front line deputy.  Ted loved the Maryland State Police and the Harford County Sheriff’s Office.

Visitation will be held on Saturday, September 22, 2012 from 10-11 AM at Mountain Christian Church, 1824 Mountain Road, Joppa MD 21085. Services will follow at 11 AM with Rev. Art F. Justice officiating.  A reception will be held at the Richlin Ballroom, 1700 Van Bibber Road, Edgewood MD 21040 immediately following the Memorial Service. . In lieu of flowers, donations may be sent to Presbury United Methodist Church, P.O. Box 175, Edgewood, MD 21040 or the Maryland Troopers Foundation (memo: Museum Fund), 1300 Reisterstown Road, Pikesville, MD 21208. Memory tributes may be sent to the family at mccomasfuneralhome.com

Harford County Has Lost A Treasure!  We Love You So Much!

(EDGEWOOD, MD) – A well-respected and beloved law enforcement official who had careers with both the Maryland State Police and the Harford County Sheriff’s Office passed away last night after a long illness.

Theodore S. Moyer, 83, of Edgewood, Md., died shortly after 7:30 p.m. yesterday. He was at his home and surrounded by family when he passed away.

Major Ted Moyer was born and raised in Hagerstown, Md. He played semi-pro football for the Browns and worked at Fairchild building planes before joining the Maryland State Police.

Major Moyer moved to Harford County in 1951 as a new trooper with the Maryland State Police. His graduating class was the first to wear the Stetson hat and the shoulder patch that is still worn by troopers. Although his assignments as a trooper changed throughout his career, he never moved from the county he loved, where he was surrounded by the many people who came to know and love him.

During his State Police career, he served as commander of the Greenbelt Post, the North East, Valley, and Bel Air barracks and of the Northern Troop. He retired from the Maryland State Police in 1981 with the rank of major. He then went on to be elected sheriff and served with the Harford County Sheriff’s Office until 1986.

Major Moyer’s service to citizens extended far beyond his public safety duties with the Maryland State Police and the Harford County Sheriff’s Office. He was a longtime youth coach who was a friend and mentor to hundreds of young people during his life. He coached many championship football, baseball, and basketball teams during almost four decades as a volunteer coach.

He was always helping people in need by providing financial or resource support. These acts of kindness were most often done without anyone other than those he helped being aware of who was responsible for the help and generosity.

Major Moyer and his wife Elaine raised three sons, David, Michael, and Steve. They enjoyed spending time together as a family and were especially fond of their four grandchildren. They instilled in their children and grandchildren the values of honesty, integrity, loyalty, commitment, and the importance of family. Their son Steve followed in his father’s footsteps. He had an outstanding career with the Maryland State Police, from which he retired as a bureau chief with the rank of lieutenant colonel. Just before his death, Major Moyer presented Steve’s son, Drew, with his State Police retirement badge.

Regardless of the rank he achieved in both the State Police and Sheriff’s Office, Major Moyer was known for always looking out for the road trooper or deputy. He never forgot where he came from and knew the importance of the men and women on the front lines of public safety service.

He is known by all those who served with him as a man who deeply loved both the Maryland State Police and the Harford County Sheriff’s Office. He is also remembered as a passionate fan of the Baltimore Colts, Baltimore Orioles, and Baltimore Ravens.

Major Moyer will be remembered for many things, including his sincere concern and compassion for the people he served. His life and career are reminders to those who knew him that if you truly want to and are willing to sacrifice your time, talent and resources, you can make a difference in the lives of others.