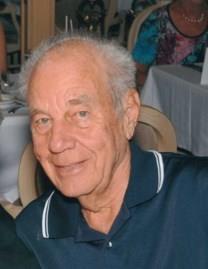 We regret to inform you of the death of Retired Major John R. Kaiser on Thursday, November 9, 2017.  Our thoughts and prayers are with the Kaiser family at this difficult time.  The following obituary information has been reprinted from the Funeral Home website.

A very special person, John R. Kaiser of Flagler Beach, Florida, passed away on Thursday, November 9, 2017. He was born on November 20, 1927 in Baltimore, Maryland. He attended Sparrows Point High School where he played varsity basketball and lacrosse. John was president of the Senior Class and graduated in 1945.

After serving in the United States Navy during 1946-1947 he enrolled in the University of Maryland and joined the Maryland State Police on April 18, 1949. He honorably served for 32 years and attained the rank of Major. During his tour of duty he was selected to attend the 9 month Police Administration Course held at Northwestern University, Evanston, IL. John received two Superintendents Commendations. One for his single-handed arrest of armed robbers of a service station in the College Park area. He also received 35 letters of recognition during his law enforcement career.

In June of 1982 he moved to Ocean Villas South in Flagler Beach, Florida. John was president of the condo association there for 8 years and served on the board for a total of 14 years. He enjoy playing golf, walking on the beach, bike riding, cruising and visiting other parts of the world. He and his wife spend part of their retirement days in Germany.

John leaves behind his beloved wife, Ursula; a son, Thomas and his wife Larianne and their two children, Elyse and Johnathan and great-granddaughter, Aubrey of Charleston, S.C.; A son, John Jr. of Dundalk, M.D.; a granddaughter, Renee Hoover and husband Chris and their three children, Tony, Brandon and Amber of Mechanicsville, M.D. Donations in his memory may be made to the Halifax Health Hospice Ormond Beach Care Center. A memorial service will be celebrated on Saturday, December 9, 2017, 1:00PM in the Chapel of Craig-Flagler Palms Funeral Home, 511 Old Kings Rd South, Flagler Beach. A gathering will begin at 12:00PM until time of the service in the funeral. Home.

For online condolences go to:www.craigflaglerpalms.com. Arrangements are in the care and trust of Craig-Flagler Palms Funeral Home and Memorial Gardens.