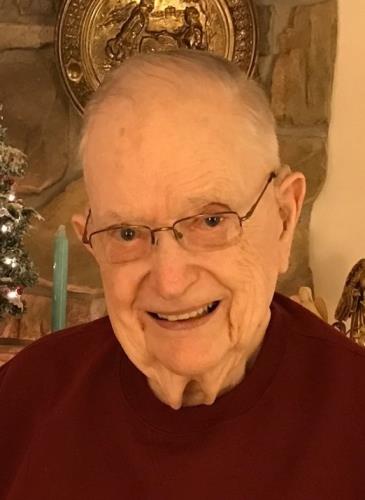 We regret to inform you of the death of Retired Lt. Robert Weisenmiller on Monday, October 23, 2017.  Our thoughts and prayers are with his family and friends at this difficult time.  The following obituary information has been reprinted from the Carroll County Times newspaper obituary section.
Robert “Bob” Weisenmiller, 90, of Hampstead, MD, passed away peacefully on October 23, 2017, surrounded by his wife and family. Born on November 13, 1926, in Cumberland, MD, he was the son of the late Paul and Lillian Smith Weisenmiller. He was the loving husband of Ann Weisenmiller.
Bob started his public service in the Navy and was stationed in the South Pacific on the USS Zaurack in World War II. After his release from military service he worked at the Baltimore & Ohio repair yards in Cumberland as a Boiler Maker. He met and married Ann Divico of Cumberland at St. Mary’s Church a little over 70 years ago, and then they resided in Cumberland for several years. He then joined the Maryland State Police and was stationed in Waldorf, MD where he lived with his family for many years. Around 1970 he was promoted to lieutenant and transferred to the Westminster barracks in Carroll County, MD, and the family moved to Hampstead, MD. He retired as First Lieutenant in 1981, and he continued to serve as a bailiff in the Carroll County court system for the next 20 years.  Bob was a member of the American Legion, Veterans of Foreign War and was the first recipient of “State Trooper of the Year” in 1961.  He enjoyed crabbing, fishing, gardening, baseball, was an all-around handy man and had a love for dogs. He was most proud of his family and greatly enjoyed being involved as a grandfather and great-grandfather.
Surviving in addition to his wife are children: Robert Weisenmiller and wife Cheryl of Berkeley, CA, Mary “Suzanne” Wheeler and companion Ivar de Jong of Ocean City, MD, and Richard “Rick” Weisenmiller and wife Karen of Hampstead, MD, a sister: Sherry Weisenmiller Owens and husband Chuck of Blountville, TN, grandchildren: Jennifer, Megan, Joshua, Zachary, Seth, Brooke and their spouses, along with 14 great-grandchildren.
A memorial mass will be held on Thursday, October 26th at 11 am at St. Bartholomew Roman Catholic Church, 2930 Hanover Pike, Manchester, MD. Arrangements are by ECKHARDT FUNERAL CHAPEL, P.A., Manchester, MD.
In lieu of flowers, contributions can be made to Humane Society of Carroll County, the Wounded Warrior Project or St. Bartholomew’s Building Fund. Online condolences may be offered at www.eckhardtfuneralchapel.com