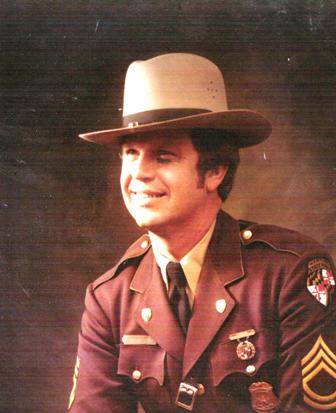 We regret to inform you of the death of Retired Lieutenant Bernard J. Chabot on Thursday, June 9, 2016.  Our thoughts and prayers are with Bernie’s family and friends at this difficult time.  The following obituary information has been reprinted from the Adams Family Funeral Home website.

Cumberland, MD – Bernard “Bernie” Joseph Chabot, 86, of Cumberland, MD, passed away Thursday, June 9, 2016, at Frostburg Village Nursing Home.
Born March 21, 1930, in Eckhart, MD, Mr. Chabot was the son of the late Edward Chabot and Christine (Shea) Chabot.  He was also preceded in death by his wife: Sandra Chabot; a son: Bernard J. “Jeffrey” Chabot; his brothers and sisters:  Edward, James, Catherine, Mary, Hilda, Mercedes, Rita, Agnes, Leo, Alma, and Richard.
A United States Naval Veteran, Bernie retired as First Lieutenant Commander for the Maryland State Police.  He spent most of his career at the LaVale Barracks and finished his career at the College Park Barracks.  The dedication that he gave to being a Maryland State Trooper was more than an occupation, it was a way of life, and he enjoyed giving back to others through his service.  After retirement, he was head of Security for Westvaco and was very active with the Helping Hands Organization.  Bernie was a member of Saint Michael’s Catholic Church, Frostburg, MD.  He was a life-member of the Fraternal Order of Police Lodge #40; a former member of the Knights of Columbus; and the Rotary Club.
Bernie is survived by his daughters: Kim Burgess and husband, Harold, LaVale, MD; and Julie Alpert and husband, Robert, Coopersburg, PA; his sister: Patricia Tase, Orlando, FL; and his brothers: Thomas Chabot, Eckhart, MD; and Leonard Chabot, Hagerstown, MD.  He also leaves behind his grandchildren: Erica Jolley and husband, Chris; Cyrena Vaughan and husband, Jason, all of Cumberland, MD; Jeffrey Alpert; David Alpert; and Danielle Alpert, all of Coopersburg, PA; as well as five great grandchildren.
Friends will be received at the Adams Family Funeral Home, P.A., 404 Decatur Street, Cumberland, MD, (www.AdamsFamilyFuneralHome.com) on Sunday, June 12, 2016, from 6:00 P.M. to 8:00 P.M.
A Memorial Mass will be celebrated at Saint Michael’s Catholic Church on Monday, June 13, 2016, at 11:00 A.M., with Father Eric Gouchat.  A reception will follow Mass.
In lieu of flowers, the family requests that memorial contributions be made to the Maryland Troopers Association, 1300 Reisterstown Road, Pikesville, MD 21208; or, the Alzheimer’s Association, Greater Maryland Chapter, 1850 York Road, Suite D, Timonium, MD 21093.
The family would like to express a heartfelt deep appreciation for the hard-working compassionate nurses and aides in the New Horizons Unit at Frostburg Village Nursing Home.