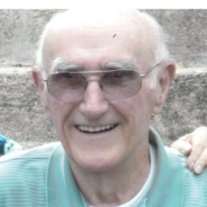 We regret to inform you of the death of Retired First Sergeant Gerald Webb on May 13, 2013.  Our thoughts and prayers are with the Webb family at this difficult time.  The following information has been reprinted from the Funeral Home website.

Born in Washington, DC on June 26, 1932, he was the son of the late John Edward Webb and Myrtle E. Adams Webb.

In 1951, he graduated from Eastern High School. In 1952, he entered the United States Air Force where he served in Japan during the Korean War and in the U.S. as an MP. He attained the rank of Staff Sergeant and was honorably discharged in 1956.

In 1956, he joined the Maryland State Police and was transferred to the Easton Barracks. In 1961, he was assigned to and trained the first MSP K-9 handlers, which went on to become the K-9 training division. In 1965, he traveled to Canada to train the Ontario Provincial Police. He served as K-9 supervisor where he trained dogs for various other police departments and also trained dogs for detection of narcotics, bombs and firearms. On July 1, 1978, he ended his amazing and respected career as a police officer of 22 years.

In 1987, he began working for Upper Shore Aging in Chestertown, MD where he served as executive director for ten years. During this time, he was a big part of the start of the Senior Center in Easton.

He was an avid golfer and played on many golf courses up and down the east coast. He also enjoyed traveling, playing poker with his friends and coin collecting. He will be remembered for the love of his family, his generosity, good-hearted humor and for being a good friend.

He was a long time active member of the American Legion Post #70, the Elks Lodge, VFW Post #5118 and the Maryland State Troopers Retirement Association.

He is survived by his two sons, Curtis Webb and Linden Webb; his two daughters, Sara Sekely and Jeanne Smith; and his three grandchildren, Kara, Kelly and Mason Smith.

He was preceded in death by his beloved wife, Lois G. Webb, who died in July of 2011, and a sister, Helen Bryan.

A funeral service will be held on Saturday, May 18, 2013 at 2:00 p.m. at Fellows, Helfenbein & Newnam Funeral Home, P.A. in Easton, where friends may call one hour prior to the service.

Burial will be private.