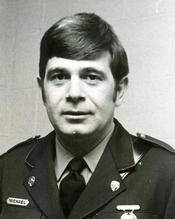 Sergeant David William Michael, Maryland State Police, Ret., 70, a longtime resident of Pasadena, died at his home on September 17, 2012 after a valiant battle with lung cancer.

David was born on February 18, 1942 in Baltimore, he was the son of William and Margaret Michael. He graduated from Edmondson High School in 1962 and served in the U.S. Army National Guard prior to beginning his career with the Maryland State police on July 5, 1966. David received many accolades throughout his career with the Maryland State Police including, “Trooper of the Year” in 1973. In 1979, he was promoted to Sergeant and placed in charge of the Prince Frederick Criminal Investigation Section. In 1981, David was promoted to Detective Sergeant and assigned to the Annapolis Barrack as the Criminal Section Supervisor. He retired in the year 2000 after many years of dedicated service.

David was a big sports fan who enjoyed reading, as well as, vacationing at the beach in Wildwood, NJ. Most of all, he loved spending time with his family.

Family and friends are invited to attend a visitation on Friday, September 21st from 2-4 and 6-8 pm at the Barranco & Sons, P.A. Severna Park Funeral Home, 495 Ritchie Hwy. Severna Park 21146. A funeral service will be held at the funeral home on Saturday at 11:00am with the interment to follow at Loudon Park Cemetery in Baltimore.

In lieu of flowers, memorial contributions may be made to the American Lung Association, 1301 Pennsylvania Ave., NW, Suite 800. Washington, DC 20004.