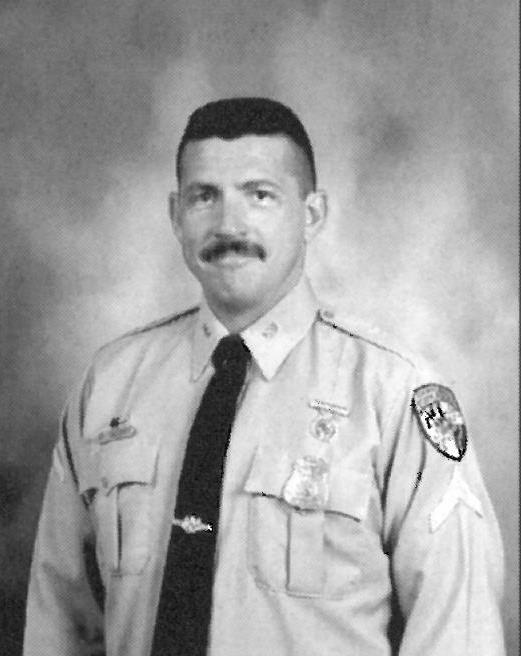 It is with deep regret that we inform you that Retired Cpl. Richard W. Poffenberger, Jr. died at 5:00 AM on December 1, 2011 at the Washington County Hospital following a heart attack.  Our thoughts and prayers are with the entire Poffenberger family at this very difficult time.

Viewing for Retired Cpl. Richard Poffenberger, Jr. will be Sunday, December 4, 2011 from 1300-1600 and 1800-2000 at the Douglas A. Fiery Funeral Home, 1331 Eastern Blvd., Hagerstown, MD 21742.  Funeral will be held on is Monday, December 5, 2011at 1000 hours at Fiery Funeral Home with burial immediately after at Rest Haven Cemetery, 1601 Pennsylvania Ave, Hagerstown, MD 21742.  There will be a reception after the funeral at the Clear Spring Fire Company, 12323 Big Pool Rd., Clear Spring, MD 21722.
News Article from Heraldmail.com
Boonsboro Police Sgt. Rich Poffenberger, 51, died Thursday, hours after working what would be his final shift.  His death has shocked the community he was sworn to protect and left some who knew him speechless.  “I’m at a loss for words,” Boonsboro Mayor Charles F. “Skip” Kauffman Jr. said. “I just still cannot believe it.”  Just Wednesday, Poffenberger had been at work, Boonsboro Police Chief Jeff Hewett said. “He worked with me yesterday and he seemed fine at the time,” Hewett said Thursday.  Poffenberger had previously suffered with a minor heart issue, but he was put on medication that seemed to be working, Hewett said.  The sergeant was planning to be at work Thursday, but he was found unresponsive in his house, and was pronounced dead at Meritus Medical Center of what appears to be natural causes, Hewett said.

Poffenberger dedicated his life to public service and spent most of his career protecting citizens in Washington County, Hewett said.  “He loved being a cop,” he said. “He was a caring guy, but he took no crap from people.”  In 1978, together with Hewett, Poffenberger began his career in law enforcement as a Maryland State Police cadet, Hewett said.
After 28 years with the Maryland State Police, most spent in Hagerstown, Poffenberger retired in 2006. That same year, the decorated state trooper ran for Washington County sheriff and not long after losing the election joined the Boonsboro Police Department.  “I’ve had a career of split-second, life-and-death decisions,” he said in a 2006 Herald-Mail online chat. “These actions have prevented an untold amount of loss of life, personal injury and property damage when it comes to protecting the public …”  One of his most memorable accomplishments came on Oct. 2, 2002, when he aided in the apprehension of the Beltway snipers, he said in 2006.  Within any police department, the relationships among officers are like that of a family, Hewett said.
In a department as small as the Boonsboro Police Department, officers are especially close.  Learning of Poffenberger’s death was as if learning of the death of a family member, Hewett said.  “To lose someone that close is just devastating,” he said.  “He will be greatly missed,” Kauffman said. “Our thoughts and prayers go out to his family and friends.”
Poffenberger was born and raised in Washington County and graduated from South Hagerstown High School in 1978, according to Herald-Mail news reports. In 2006, he and his wife Teresa had been married for 24 years and had two daughters, Jamie and Jordan, according to news reports.