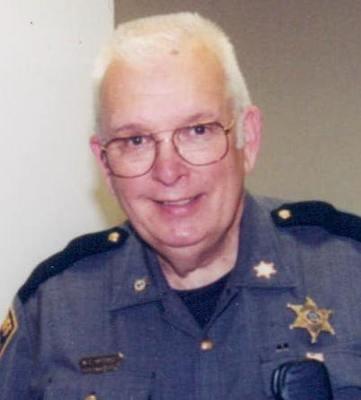 We regret to inform you of the death of Retired Corporal William “Bill” E. Mitchell on January 12, 2014.  Our thoughts and prayers are with Bill’s family and friends at this difficult time.  The following obituary information has been reprinted from the Holloway Funeral Home website.
William “Bill” Edward Mitchell
Quantico-Bill Mitchell, 77, of Quantico, died on Sunday, January 12, 2014 at Peninsula Regional Medical Center. Born in New York, NY, on June 4, 1936, he was the son of the late Earl and Georgia Mitchell.
Following graduation from Wi-Hi he served in the US Army. After his military service he became a Maryland State Trooper with 21 years of service. Following retirement from the Maryland State Police he worked 20 years with the Wicomico County Sheriff’s Department. Bill was a member of the Delmar Masonic Lodge 201, Boumi Temple, Tall Cedars and Shriners. He enjoyed the outdoors, hunting, talking to his friends and spending time with his grandchildren.
Bill is survived by his loving wife of 52 years, Jean Lekites Mitchell; a son, Patrick Mitchell and his wife Peggy of Quantico; a daughter, Amy Jonke and her husband Jeff of Texas; four grandchildren, Cody Mitchell, Mitchell Jonke, Matthew Jonke and Ellie Jonke; mother-in-law, Esther Lekites of Selbyville and an aunt; Maria Mitchell of Salisbury.
A funeral service will be held at 3:00PM on Saturday, January 18, 2014 at Holloway Funeral Home, P.A. A visitation will be held from 1:00 PM – 3:00 PM.
In lieu of flowers, memorial donations may be made to the ALS Clinic, Peninsula Regional Medical Center c/o ALS Clinic, 100 East Carroll Street, Salisbury, MD 21801.
Arrangements are in the care of Holloway Funeral Home, P.A., 501 Snow Hill Road, Salisbury, MD 21804. To send condolences to the family, please visit www.hollowayfh.com.