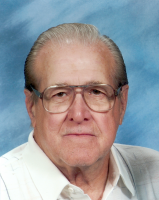 We regret to inform you of the death of Retired Corporal Joseph Helmstetter on Friday, January 30, 2015.  Our thoughts and prayers are with his family and friends.  The following obituary information has been reprinted from the funeral home website.

Born on the Fourth of July 1927, in Cumberland, MD, Mr. Helmstetter was the son of the late Lawrence Joseph Helmstetter and Mary (Cavanaugh) Helmstetter. He was also preceded in death by five brothers: William “Bill”, Edward, George, Mike, and J. Thomas Helmstetter; and two sisters: Virginia Padfield and Jane Mull.

Joe was a World War II Veteran of the United States Navy aboard the LSM 46 and received the Pacific Theater Ribbon, the American Theater Ribbon, and the Victory Medal. He was a member of the Sheet Metal Workers Local #100 for many years. He served as a Maryland State Police Trooper from 1955 to 1981 and retired as Corporal. In 1981, he returned to work sheet metal and retired fifteen years later. He was a member of the Knights of Columbus Council #586 where he was past Grand Knight and also served as past Maryland District Deputy. He was also a member of the Chief Justice Taney 4th Degree where he was past Faithful Navigator.