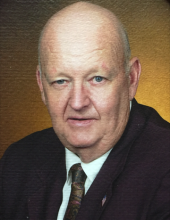 We regret to inform you of the death of Retired Corporal James L. Galyon on November 19, 2016.  Our thoughts and prayers are with Janet, her family and their many friends at this difficult time.  The following obituary information has been reprinted from the Pritts Funeral Home website.

James Lawrence “Jim” Galyon, 77, passed away at his home in Finksburg on November 19, 2016.
Born September 19, 1939 in Asheboro, North Carolina, he was the son of the late William Russell and Grace (Ellison) Galyon. He was the loving husband of Janet Vivian (Nathan) Galyon, his wife of 32 years.
Jim was a Maryland State Trooper, from 1963 to 1989. Most of his career was in the K-9 Unit where he handled and trained dogs for bomb and drug detection. After his retirement, he worked as an Investigator for the MD Insurance Administration Fraud Unit. He later was a background investigator for the federal government.
He was a member of FOP Lodge #69, the Maryland Troopers Association, and the Maryland State Police Alumni Association, where he served as secretary. He was a member of the Westminster Baptist Church. Jim also served in the Air National Guard. He enjoyed fishing and playing guitar.
Surviving, in addition to his wife, are son Michael J. Galyon (Joy) of Aberdeen and step-children Steven L. Zeeler (Valerie) of Grand Island, Florida and Tammye L. Zgorski (Joseph P.) of Finksburg; 3 grandchildren and 5 great-grandchildren. He is also survived by a brother, William R. Galyon, Jr (Louise) of Mt. Airy. He was predeceased by his grandson, Phillip J. Zgorski.
The family will receive friends on Tuesday, November 22, 2016 from 11:00 am until 2:00 pm at Pritts Funeral Home and Chapel, 412 Washington Road, Westminster, where a funeral service will be held at 2:00 pm, with his pastor, Rev. Larry Steen officiating. Interment will be private.
In lieu of flowers, memorial donations may be made in his name to the Maryland State Police Alumni Association, c/o Ken Harry, 18710 Falls Road, Hampstead, MD 21074 or Westminster Baptist Church, 354 Crest Lane, Westminster, MD 21157.