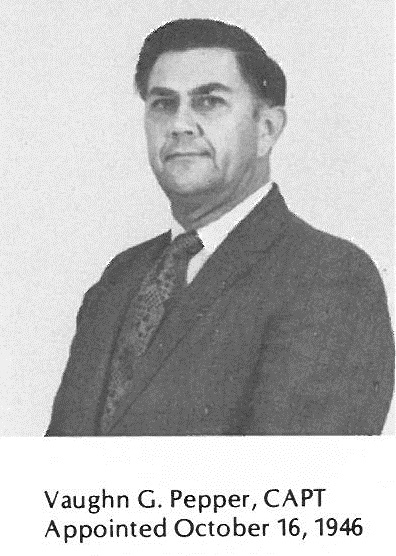 Arrangements for Retired Captain Vaughn G. Pepper and his wife Marjorie are scheduled for Friday, September 14, 2012 at Our Lady of Good Counsel Catholic Church on Main Street in Secretary, Maryland.  A viewing will be held at 10:00 AM at the Church with a Mass at11:00 AM.  Funeral service will follow the Mass.  Our thoughts and prayers are with the Pepper family and their friends at this difficult time.

Baltimore County police said Tuesday they were searching for a man whose elderly grandparents were found dead this week in the
Pikesville home that the three shared.

Vaughn George Pepper, 87 and Marjorie Marie Pepper, 85, were discovered in their home Monday afternoon. Police are investigating
their deaths as homicides and said they do not believe the killings were random.

Detectives continue to search for the couple’s grandson, Matthew Long, 31, who lived with his grandparents in the 800 block of
Olmstead Road, to question him. Police spokeswoman Elise Armacost said they are not calling him a suspect.

“Because he lived at the home, we’re interested in having him talk with us,” Armacost said. As of Tuesday evening, she said
detectives had not made contact with Long. “We have been looking for him since this happened.”

She could not say whether authorities are searching out-of-state for Long, whether police believe he is in danger or why he was
staying with his grandparents. Armacost said police believe the victims died sometime Saturday.

Police said they recovered a weapon at the scene, but have not said what it was or released a cause of death. Detectives have ruled
out a shooting, Armacost said.

Long’s brother Gregory declined to discuss the case when reached by phone Tuesday, but said, “The family is coming together to
memorialize two wonderful Americans.”

After serving in the military, Vaughn Pepper was a state trooper for 30 years, from 1946 to 1976, State Police spokesman Greg
Shipley confirmed. He retired as a captain from the Waterloo Barrack in Howard County.

The couple lived for years in the modest, two-story white-brick home in the historic Sudbrook Park neighborhood.

Several neighbors recalled friendly waves from the Peppers, who often sat out on their side porch. They recalled Vaughn Pepper
working in the yard and clearing snow with his grandson.

The Peppers were longtime members of nearby Saint Charles Borromeo Roman Catholic Church.

Neighbor Reid Myers, 64, said he grew up on the same street as the Peppers and had known them since he was a child. His father was
close friends with Vaughn Pepper.

“He was a really friendly guy,” Myers said of Pepper.

Myers said he learned of the deaths through a phone call from an old friend, who grew up on the same block. He said the neighborhood
is in shock.

Tuesday afternoon, Pikesville Precinct outreach officer Larry Stallings knocked on doors to speak with residents about the killing,
trying to answer as many questions as possible about the case and assuage neighbors’ concerns about violence in the quiet
neighborhood.

Police said there was no apparent forced entry to the home. They had been called to the home by a neighbor who had been contacted by
a concerned out-of-state relative of the victims.

Officers could see Vaughn Pepper lying on the floor when they were called to the home at about 4 p.m. and later found his wife in
the basement. Both had what were described as traumatic injuries

The medical examiner’s office will determine the cause of death.