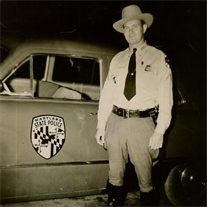 We regret to inform you of the death of Retired First Sergeant Darl Hershberger on August 22, 2016.  Our thoughts and prayers are with his family and friends at this difficult time.  The following obituary information has been reprinted from the Fellows, Helfenbein and Newnam Funeral Home website.
Obituary for Mr. Darl Hershberger
Darl Hershberger of Chestertown, MD died Monday August 22, 2016 at Compass Regional Hospice in Centreville, MD. He was 93.
Darl Hershberger was born September 29, 1922 in Pierce, WV the son of the late Harry Hershberger and Della M. Hershberger. Darl grew up in Kitzmiller, MD and left school and hitchhiked to Indiana where he put himself through college. He enlisted in the United States Navy and served his country for 3 years before being honorably discharged.  He then entered in the police academy and worked for the Maryland State Police for 24 years before retiring in 1972 as a 1st Sergeant.  He married his late wife Helen Jane Hersberger in 1947. Mr. Hershberger was a Life member of American Legion Post 36 and a Lifetime member of the Chestertown Elks Lodge BPOE 2474.  He enjoyed fishing and traveling, going to the library to read and going to the Chestertown McDonalds everyday where he enjoyed people watching.
In addition to his parents he was preceded in death by his wife, Helen Jane Hershberger, and 12 siblings.  He is survived by two sons, Joey D. Hershberger (Marjorie) of Chestertown, MD, Jim D. Hershberger (Shari) of Henderson, MD, one sister, Lee Anna Davis of Kitzmiller, MD, and four grandchildren, Casey Hershberger of Chestertown, MD, Cory Hershberger of Chestertown, MD, Michael Herberger of Chestertown, MD, Michael Layton of Henderson, MD.
A private memorial service will be held at the Eastern Shore Veterans Cemetery in Hurlock, MD.
In lieu of flowers contributions can be sent to American Legion Post 36 Frank M. Jarman P.O. Box 322 Chestertown, MD 21620, or Elks Lodge BPOE 2474 P.O. Box 128 Chestertown, MD 21620 or Compass Regional Hospice 255 Comet Dr. Centreville, MD 21617.