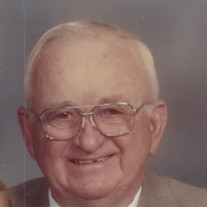 We regret to inform you of the death of Oliver B. Granger, Husband of Retired PCO Mary D. Granger, on Thursday, November 30, 2017.  Our thoughts and prayers are with their family and friends at this difficult time.  The following obituary information has been reprinted from Legacy.com.  Funeral arrangements by Framptom Funeral Home.
EASTON – Oliver Bain Granger, known fondly as “Sonny,” passed away on Thursday, November 30, 2017 at Talbot Hospice House. Funeral services will be held on Tuesday, December 12, 2017 at 11 a.m. at St. Mark’s United Methodist Church, 100 Peachblossom Rd, Easton, MD 21601.
A visitation with the family will be from 10-11 a.m. on Tuesday at the church.  Interment will be private at the Maryland Eastern Shore Veterans Cemetery.
To share memories with the family, please visit www.framptom.com
Obituary for Oliver Bain “Sonny” Granger
Oliver Bain Granger, known fondly as “Sonny” of Neavitt, passed away on Thursday, November 30, 2017 at Talbot Hospice in Easton. He was 86.
He was born in Fairbank, MD, on August 5, 1931, the son of the late William O. “Peck” Granger and Myrtle Bradshaw. He was also raised by his grandfather whom he adored, Captain Jacob Bain Bradshaw.
Sonny graduated from St. Michaels High School in 1948. He then enlisted in the United States Army and served his country during the Korean War. During his time in the service he was a combat intelligence officer and taught in Arkansas and attended intelligence school in Japan. During his three tours in Korea he gave shots of the Boxer Warrior Ship, the Missouri, the Iowa, & the New Jersey war ships. Sonny received multiple citations during his war efforts which included three presidential citations, CID pin as part of the 2nd infantry division, Connoisseur Badge of Honor, Distinguished Medal of Honor. During his three combat tours in Korea he received several compact fractures which he had to relearn his motor skills which we now call PTSD. He even collected string and aluminum foil for the war effort to help his country.
After his time in the service he began a long line of amazing jobs over his lifetime which included the following: the Pittsburgh Demoine Steel Co., Playtex Co. in Dover, DE, Hughes Corp in Houston, TX, G.E. Company & Purex both in New Jersey, a cable manager, correctional & probate officer at Jessup Prison, assistant manager of the former Hallowells Chevrolet, the former Fortunbaugh Volkswagen, Westing House in Trenton, NJ, worked on the Verrazzano Bridge, the Curtis Bay MD Dry Dock, contractor for Whitting & Turner, Sealtest Dairy Company, the Canning Factory now Chesapeake Landing, Sears Acceptance Org., Boilmaker, owned a roofing business, he worked for the former B & O Railroad now the Chessie System, the trade center in Baltimore, a land surveyor in Louisiana & Texas, owned his own roofing business, he ran a gas station, was a past deputy sheriff for Anne Arundel Co., Gates Engineering, worked at Butler Aviation at BWI, and served as a courier for the state department.
During his life he created a breathing tube for scuba divers and the coast guard gave him $500 for his initiatives. His creative mind also made the first backboard, which he created from an iron board, and is now known to medics as the back boards used to help accident victims.
One of Sonny’s loves was boxing and he had the privilege of sitting on the shoulders of one of his heroes, Jack Dempsey when Jack made a visit to Neavitt and he also was able to meet Max Bear and Ralph Greenleaf. While he he was in the service, he won the Golden Glove Boxing Title serving under Patton’s Army.
He was a former boy scout and was instrumental in getting a troop started in St. Michaels. Sonny was nominated in the “Who’s Who” in 1975, following in his mother’s footsteps as she too was nominated. He was also skilled with his hands and his love for carpentry came from his grandfather Granger.
Sonny was the last surviving member of the original St. Michaels Volunteer Fire Company. He also was a member of the local 101 in Baltimore. Sonny took great pride in being a member of the Disabled American Veterans Association, where he served as past chaplain and also was a member of the VFW and the American Legion all located in Cambridge. He also was a member of the Art League in St. Michaels.
Sonny was truly an avid outdoorsman who enjoyed spending his time on the Chesapeake Bay. He brought seeding and oyster restoration to the bay and enjoyed crabbing and fishing from the beautiful waters of the bay. Hunting was also enjoyed by Sonny. Sonny’s favorite saying was, “A Fisherman Fishes”, and boy was he ever good at it. We can certainly say Sonny covered a lot of ground in his lifetime and each moment in time was very special to him.
He is survived by his wife of 25 years, Mary Davis Granger whom he married January 11, 1992, three children, Gary Granger, Sr. of Chesapeake Beach, VA, Doreen Conway and Jackie Granger both of Pennsylvania, 8 grandchildren, 4 great-grandchildren, and a brother, Carroll Wesley Newcomb of Richmond, VA.
Funeral services with military honors will be held on Tuesday, December 12, 2017 at 11 a.m. at St. Marks United Methodist Church in Easton with Rev. Missy Rekitzke officiating. A visitation with the family will be held from 10-11 a.m. at the church. Burial will be private at the Maryland Eastern Shore Veterans Cemetery.
In lieu of flowers memorial contributions can be made to St. Marks United Methodist Church, Building Fund, 100 Peachblossom Road, Easton, MD 21601 or to St. Michaels Volunteer Fire Company, 1001 N. Talbot Street, St. Michaels, MD 21663 or to Talbot Hospice Foundation, 586 Cynwood Drive, Easton, MD 21601.
Arrangements by Framptom Funeral Home in St. Michaels. www.framptom.com