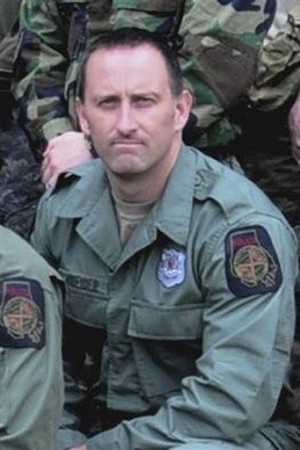 We regret to inform you of the death of Officer First Class Jason Lee Schneider of the Baltimore County Police on Wednesday, August 28, 2013.  Officer Schneider was shot while serving a high risk warrant at a home in Catonsville, Maryland.  Our thoughts and prayers are with Officer Schneider’s family, fellow officers and friends at this difficult time.   The following obituary information has been reprinted from the Funeral Home website.

Jason Lee Schneider, 36 years old of Manchester, a Baltimore County Police Officer, died suddenly, August 28, 2013, in the line of duty.
Born February 11, 1977 in California, he was the son of Charles Dennis Schneider and Karen Ann Buchheister Schneider.
He was the husband of Ericka Nicole Fulton Schneider.
He was a graduate of North Carroll High School, class of 1995. He served honorably with the U.S Marine Corps. In addition to his duties as an officer he was a member of the Baltimore County Police Swat Team for 9 years.
In addition to his wife and parents he is survived by his two children Brandon and Kayla, two brothers and their spouses, Kenneth and Autumn Schneider of Hampstead and Michael and Nicole Schneider of Westminster. Also survived by many other relatives and friends.
Friends may call on Friday from 2-9 PM at the Eckhardt Funeral Chapel, P.A. 3296 Charmil Dr. Manchester, MD 21102.
A Requiem Mass will be celebrated on Saturday at 10: 00 AM from St. Bartholomew Roman Catholic Church, 2930 Hanover Pike, Manchester. Rev. Fr. Michael Roach officiating.
Interment in Dulaney Valley Memorial Gardens.
Online condolences may be offered at www.eckhardtfuneralchapel.com
Additional details are available in the news coverage link below.