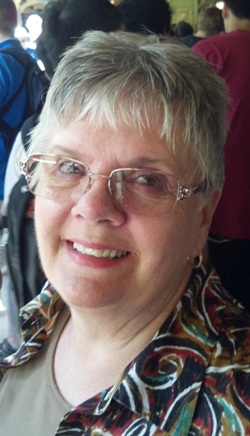 We regret to inform you of the death of Joan H. Hutchins, wife of Retired Major Charles Hutchins and sister in law of Retired Colonel Timothy Hutchins, on April 11, 2013.   Our thoughts and prayers are with the Hutchins family and their friends at this difficult time.  The following obituary information has been reprinted from the Rausch Funeral Home website.

Joan Hance Hutchins, 69, of Venice, FL and a former resident of Calvert County, passed away April 11, 2013 at Baltimore Washington Medical Center in Glen Burnie, MD. She was born February 15, 1944 in Prince Frederick to Claude Young and Mildred Agnes (Woodward) Hance. Joan was raised in Prince Frederick and attended Huntingtown Elementary, and Calvert Junior and High Schools, graduating in 1962. Joan married Charles Reid Hutchins on February 1, 1964 and they lived in Bladensburg, Hyattsville, and then returned to Dunkirk until 1988. They then moved to Millersville until Mr. Hutchins retired from the state police in 1993, and have since lived in Venice, FL. Joan was a homemaker, and was also employed as a clerk at Nationwide Mutual Insurance in Annapolis, a secretary for Kelvin Hughes, a marine navigation electronics company in Annapolis. Joan also worked for the Business Roundtable in Washington, D.C., was a rural letter carrier in Calvert County and a human resources program instructor for the US Postal Service from 1987 to 1990. Joan was a member of the American Legion Ladies Auxiliary in Venice, FL. She loved to travel with her husband, was an avid genealogist, and also enjoyed boating, the Chesapeake Bay and gardening.

Joan was preceded in death by her father, Claude Hance. She is survived by her husband Charles Reid Hutchins, sons Michael C. Hutchins of Ocean City, and Stephen R. Hutchins and wife Mary of Arnold, grandchildren Justin M. Hutchins of Venice, FL, David J. Hutchins of Arnold, and Megan M. Hutchins of Glen Burnie and a great-granddaughter McKenna L. Montgomery. Also surviving are her mother Mildred Hance Stinchcomb and a sister Janet Summerville both of Millersville

The family will receive  friends on Tuesday, April 16, 2013 from 2 ? 4 and 7 ?9 PM at the Rausch Funeral Home, 8325 Mt. Harmony Lane, Owings, Calvert County, Maryland.  A funeral service and a celebration of Joan?s life will be held Wednesday, April 17, 2013 at 12 noon at St. Paul?s Anglican Church, Route 178 and Crownsville Road, Crownsville, Maryland.  After the funeral services, family and friends will reassemble at the Asbury Cemetery, Route 231, Barstow, Md at 2 PM for the interment.

In lieu of flowers,  a memorial donation may be made to the American Cancer Society, 1041 Route 3 North, Gambrills, Md. 21054, or the American Heart Association, P.O. Box 5216, Glen Allen, Va. 23058.  To leave condolences visit www.rauschfuneralhomes.com.