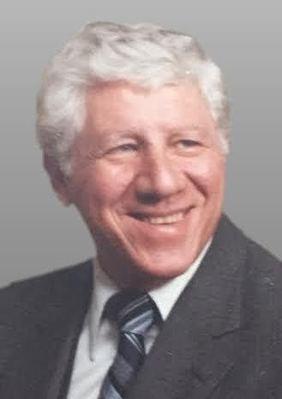 We regret to inform you of the death Mr. John W. Psota, father of Retired Sgt. John Psota on October 17, 2015.  Our thoughts and prayers are with John and his family at this time.  The following obituary information has been reprinted from Holloway Funeral Home website.
John William Psota
Millsboro-John William Psota, 91, of Millsboro, DE and formerly of Salisbury, MD died peacefully on October 17th at Atlantic Shores in Millsboro, DE. He was born in Long Island, NY on December 28, 1923. He attended Smithtown High School.
During WWII, he was a B-17 togglier in the 8th Army Air Corps., 303rd “Hells Angels” Bomb Group, and completed many missions over Europe. After the war, he owned AA Taxi in Smithtown, NY before entering the Cambridge School of Broadcasting in NYC, NY. In 1953 he married Sylvia Helen Pearson and they then moved to Salisbury, MD in 1958. In Salisbury, “Johnny Williams” was an on-air radio and television personality with WJDY and WBOC. He organized the Wicomico County Youth Organization, hosted the Johnny Williams Show and provided many avenues for area teens to be entertained through “record hops” and other activities including summer dances at the Pier Ballroom in Ocean City, “teen splashes” at the Elks Club and a teen nightclub called “Sudden Sound”. In 1971, he left radio and entered the restaurant business, owning a few restaurants including Johnny’s Subs and Pizza on 69th St. located in Ocean City, MD. In 1990, Johnny returned to his love of broadcasting working at WLVW, WSUX, WSSR and WJWL, and was the long time voice of the Johnny Janosik’s commercials. As a promoter, he strove to bring quality entertainment to the Wicomico County Youth and Civic Center. He retired in 2008.
His passions were music, writing, baseball, travel, and making people smile. Johnny was a member of the VFW, Community Players, American Legion, Optimist Club, Delmarva Scout Council, lifetime member of Elks Lodge #817, a Friends of the Salisbury Zoo board member, Past President of the Wicomico County Republican Club and past member of the Wicomico County Republican Central Committee.
He is survived by his daughter, Josie Gutierrez and her husband Dan, of Avondale, PA, and his son, John David Psota, and his wife, Barbara, of Salisbury, MD. Also surviving are four grandchildren: Joseph and Steven Gutierrez, and Ryan and Evan Psota. He is preceded in death by his loving wife of 61 years, Sylvia, his parents, Joseph and Josephine Psota, sisters Frances and Rose, brothers Joseph, Anthony, and George.
On Saturday, October 24 at 1p.m., a memorial service will be held at Holloway Funeral Home, 501 Snow Hill Rd. Salisbury, MD 21804.
In lieu of flowers, the family asks that donations be made in Johnny”s honor to Atlantic Shores Rehabilitation and Health Center, 231 S. Washington St. Millsboro, DE 19966 or to Melmark, a facility dedicated to providing services to children and adults within the autism spectrum. (Phone: 610-325-4981 or donations@melmark.org.)
Arrangements are in the care of Holloway Funeral Home, P.A., 501 Snow Hill Road, Salisbury, MD 21804. Please visit www.hollowayfh.com to send condolences to the family.