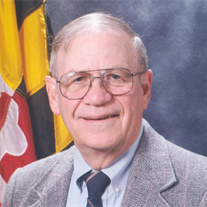 We regret to inform you of the death of Mr. John “Jack” Edward Thomson, MSP Easton Volunteer in Police Service on July 8, 2017.  Our thoughts and prayers are with Jack’s family and friends at this difficult time.  The following obituary information has been reprinted from the Helfenbein & Newnam Funeral Home website.
Obituary for Mr. John “Jack” Edward Thomson
John E. “Jack” Thomson, 79, of Easton, MD died on July 8, 2017 at his home. He was born on May 11, 1938 in Highspire, PA, son of the late John E. Thomson and Mary Elizabeth Atticks Thomson.
Mr. Thomson attended Highspire High School, graduating in the class of 1956. He then continued his education at the University of Maryland until 1959, when he enlisted in the U.S. Army. After serving in Germany, he was honorably discharged in 1962. Upon returning home, Mr. Thomson attended Electronics School in Pennsylvania, receiving an associate’s degree. In 1964, he began his career with NASA Goddard Space Flight Center, and in 1995 retired as Satellite Operations Manager.
On February 14, 1982, he married Barbara Jane Neiper and resided in Crofton, MD. In 1986, they moved to Grasonville, and in 1999 to Easton.
Mr. Thomson was a member of the Maryland Terrapin Club and has been an active volunteer with the Maryland State Police since 2001.
He is survived by his wife, Barbara and two step-sons; Richard Hanahoe and his wife Ginger and Steven Hanahoe, one sister, Joan Vanryn, four grandchildren; Richard Hanahoe, Lauren Hanahoe, Sara Hanahoe and Michael Hanahoe and three great-grandchildren.
A funeral service will be held on Saturday, July 15, 2017, at 2 PM at Fellows, Helfenbein & Newnam Funeral Home, P.A., 200 S. Harrison St., Easton, where friends may call from 12-2 PM. Burial will be in Oxford Cemetery.