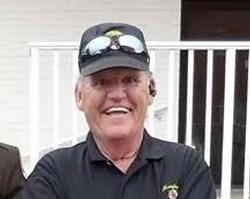 We regret to inform you of the death of Mr. James R. Nooney, President and Founding Officer of the Maryland Troopers Foundation, Inc.  Mr. Nooney passed away today, May 1, 2014 at 1:00 PM after being hospitalized following a long battle with cancer.  Our thoughts and prayers are with Jim’s family and his many friends at this difficult time.
James Ronald Nooney, ”Jim”, age 63, died Thursday, May 1, 2014 at Atlantic General Hospital in Berlin. Born in Charleston, WV, he was the son of the late James Henry Nooney and Melva Welch Nooney.  He is survived by his wife, Melanie M. Buchanan Nooney, and sons; Adam Nooney and his wife Samantha of Charleston, WV, Jon Nooney and his wife Demiah of Ocean Pines, and Nick Nooney and his wife Michelle of Charleston WV. There are five grandchildren; Cooper Nooney, Cameron Nooney, Arabella Nooney, Rhyder Nooney and Wyatt Nooney.
Mr. Nooney served in the Army National Guard of West Virginia. He loved politics, and worked in the public relations field most of his life. He was the host of “Eggs and Issues”, an early morning show on WETT Radio, did weather and public programming, and was the original host for “Good Things Delmarva” for WMDT, Channel 47.where he received two Telly Awards. He was President of the Maryland Troopers Foundation Golf Tournament organizer supporting St. Jude Children’s Hospital, active in fund raising for Alzheimer’s Foundation and Star Charities, Habitat for Humanity, Ocean City Air Show, member of Ocean City and Salisbury Chamber of Commerce, Lions Club in Clendenin, WV, and a founding member of the Ocean City Parrot Head Club.
A memorial service will be held Sunday May 4, 2014 at 2:00 PM at the Burbage Funeral Home in Berlin. Rev Dick Bunting will officiate. Friends may call one hour prior to the service. A donation in his memory may be made to: American Cancer Society Northern Worcester County Relay for Life, 1315 Mt. Hermon Rd. Suite D, Salisbury, MD 21804, or Maryland Troopers Foundation, 1300 Reisterstown Rd., Pikesville, MD 21208. Letters of condolence may be sent via: www.burbagefuneralhome.com .