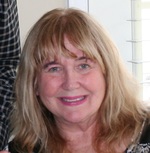 Regret to inform you of the death of Margaret Sue Hoffman, wife of the late Retired First Sgt. Donald E. Hoffman on 8/30/17.  Our thoughts are with her family and friends at this difficult time.  The following obituary is reprinted from the Eline Funeral Home Website.
Margaret Sue Zebec Powers Hoffman, age 68 of Finksburg, died peacefully Wednesday August 30, 2017. Born May 7th, 1949 she was the loving daughter of the late Margaret Fowble and the loving mother of two sons; Joseph Daniel Zebec, III of Rising Sun and Eric Powers of Westminster. She was the loving wife of the late Donald Eugene Hoffman of Finksburg, MD of 26 years. She worked as a paralegal. She enjoyed time with family, friends, her grandchildren, and walks with her brother. She enjoyed the ocean, music, art, animals, cooking, gardening, flowers, and traveling.
She is also survived by her brother Bill Fowble of Upperco and sisters Beverly Bryant of Oakcrest and Kathleen Heiss of Upperco and grandchildren Joey Zebec and Ashylnn Zebec and Reagyn Powers and Rylynn Powers.
Family will receive friends at the Eline Funeral Home, 11824 Reisterstown Road (at Franklin Blvd.) on Thursday, September 7, 2017 from 3:00 to 5:00 & again from 7:00 to 9:00 PM.  Service will be held on Friday, September 8, 2017 at 11:00 AM at the funeral home.  Interment in All Saints’ Cemetery.