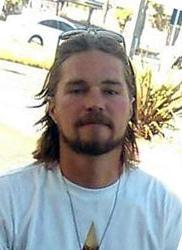 We regret to inform you of the death of Eric Donald Grimes (31), son of Retired Cpl. Albert Donald Grimes on Tuesday, January 13, 2015.  Our thoughts and prayers are with the Grimes family and their friends at this difficult time.  The following obituary information and arrangements have been reprinted from the Hartzler Funeral Home website.  Condolences can be left at     http://www.hartzlerfuneralhome.com/obituary/Eric-Donald-Grimes/Huntington-Beach-CA/1473050
Mr. Eric Donald Grimes, 31, of Huntington Beach, CA, died Tuesday, January 13, 2015 due to injuries sustained in a motorcycle accident. Born September 27, 1983 in Westminster, he was the son of Donnie Grimes of Taneytown and Beth Bassler of New Windsor. Eric was a self-employed handyman; a member of St. Luke’s (Winters) Lutheran Church, New Windsor; member of Suicidas, the largest motorcycle group in California and the Christian group, New Life Spirit in Southern California where he was preparing to become a Christian counselor. He was a talented artist who also enjoyed surfing, snowboarding, ice hockey, and riding his bike.
In addition to his parents, he is survived by 2 brothers, Andrew Joseph Grimes and wife Joanna of Uniontown and Jesse Donald Grimes of Finksburg; 2 nieces, Arianna and Tori Grimes; maternal grandmother, Phyllis Bassler of New Windsor; paternal grandmother, Effie Grimes of New Windsor; and numerous aunts, uncles and cousins. He was predeceased by grandfathers, Robert Bassler Sr. and Albert D. Grimes Sr. and great grandparents, Marie and Kenny Grimes.
A funeral service will be held at 11:00 a.m. Saturday, January 24 at St. Luke’s (Winters) Lutheran Church, 701 Green Valley Rd., New Windsor, with Rev. Anne Durboraw, church pastor, officiating. Interment will be in Winters Cemetery. The family will receive friends at Hartzler Funeral Home, 310 Church St., New Windsor, 2-4 and 7-9 p.m. Friday, January 23 and from 10:00 a.m. until time of service Saturday at the church.
Memorial contributions may be made to Arundel House of Hope, 514 N. Crain Highway, Glen Burnie, MD 21061 or to New Life Spirit Recovery, Huntington Beach, CA 92647.