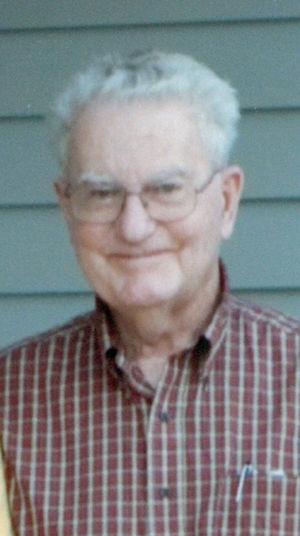 We regret to inform you of the death of Dr. William M. Mooney, Sr., Assistant Director, FBI, (Ret.) on January 22, 2017.  Dr. Mooney is the father of Captain (ret) John J. Mooney and father in-law of Sgt. (ret) Elizabeth Wilhelm Mooney.  Our thoughts and prayers are with Dr. Mooney’s family and friends at this difficult time.  The following obituary information has been reprinted from the Gettysburg Times.
William M. Mooney Sr., 92, of Fairfield, passed away peacefully on Sunday, Jan. 22, 2017 at his home.
Born in Kingston, New York on March 6, 1924, he was the son of the late John J. and Elizabeth C. (Grey) Mooney. Mr. Mooney is survived by his second wife Christine Ann (Wetzel) Mooney; he was predeceased by his first wife Theresa M. (Anello) Mooney who died in 2001.
He was a veteran of World War II, serving with the U.S. Naval Air Corps. Mr. Mooney graduated from St. John’s University in New York and earned his masters and doctoral degrees from Catholic University, Washington, D.C. He had a 25-year career with the FBI, retiring in 1976 as the bureau’s assistant director. Mr. Mooney then served as a professor at Iona College and Mt. St. Mary College in New York for several years.  He was a member of St. Mary’s Catholic Church in Fairfield, Knights of Columbus, U. S. Coast Guard Auxiliary, and volunteered for many years at the National Shrine of St. Elizabeth Ann Seton.
In addition to his wife, Mr. Mooney is survived by his 10 children, Elizabeth A. Safford of Kingston, N.Y., Kathleen M. Mooney of Charlestown, W.Va., Lori Norman of Royal Palm Beach, Fla., William M. Mooney Jr., of Olney, Md., Gerard M. Mooney of Half Moon Bay, Calif., Mary M. Diaz of Biglerville, Ellen M. Quinn of Gaithersburg, Md., Patrick T. Mooney of Nokesville, Va., John J. Mooney of Bel Air, Md., and Christopher J. Mooney of Plymouth, Mass.; five step-children, Christine McDermod, Robert Careless, Mary Donohue, Edward Careless and Susan Galasso; two sisters, Sister Gloria W. Mooney, S.U., and Sister Mary A. Mooney, S.U., both of Rhinebeck, N.Y.; and many grandchildren and great-grandchildren. He was predeceased by his sister Sister Elizabeth C. Mooney, O.P.
A Mass of Christian Burial will be celebrated at noon on Thursday, Jan. 26, 2017 at St. Mary’s Catholic Church, 256 Tract Road, Fairfield, with Fr. Benny Jose as celebrant. A viewing will be held at the church on Thursday from 10 a.m. until noon. Interment, with full military honors provided by the Adams County Allied Veterans, will follow the Mass in St. Mary’s Cemetery.
The family suggests memorials to The Society of St. Ursula, 50 Linwood Road, Rhinebeck, NY 12572; or The National Shrine of St. Elizabeth Ann Seton, 333 S. Seton Ave., Emmitsburg, MD 21727.
The Monahan Funeral Home in Fairfield is assisting the family with the funeral arrangements. Online tributes and condolences may be made at monahanfuneralhome.com.